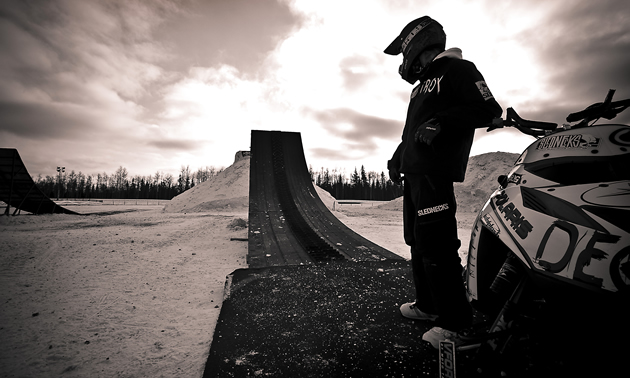 The countdown to what will surely be the biggest snowmobile event in Western Canada is on. The World Snowmobile Invasion in Whitecourt, Alberta, is less than a month away (February 11 to 15, 2015), and members of the Whitecourt Trailblazers are happy to report that there is already a deep layer of snow on their trails.

That is exactly what the club wants for its Golden Triangle Guided Tour, which is one of the first activities of this week-long event.

Day 1 of the WSI also includes the Millar Western Ice Sculptures. Free for spectators and participants, this activity features demonstrations and a mini-workshop for those who want to learn the art of ice sculpting.

On Day 2, the Trailblazers intend to break a Guinness World Record with the ASA World Snowmobile Parade. The current world record for largest snowmobile parade is 820 snowmobiles, but the Trailblazers hope to have at least 1,000 sleds at their parade. Snow will be hauled in for the parade—which will take place in downtown Whitecourt. Sledders can watch or participate for free. Vintage sleds and kids are welcome, too.

Then, it’s the BRP/Polaris Freestyle Show, featuring Levi LaVallee, Sam Rogers, Daniel Bodin and three other riders from the Winter X Games. From whips to backflips, these boys will throw down all of the tricks you would typically see at the X Games—and it’s all family friendly, too.

You’ll want to send the kids home, though, if you’re planning on heading to the Western Canadian Festival that starts after the Freestyle Show. This event, which is for those 18 years and older, features beer and other libations, along with dancing and live music by the Boom Chucka Boys.

Don’t stay too late at the Festival because the World Snowmobile Rally/ASA Jamboree starts at 9 a.m. the following morning, and this is an event you won’t want to miss.

“The Rally is going to be a one-of-a-kind event with each checkpoint representing a country,” said Cindy Brooks, event planner for the Invasion.

Riders in the rally will have an Invasion passport that they can get stamped as they pass through each checkpoint and they will also get to sample food and drinks from each country. Finland, Norway, Sweden, Japan, the USA and Canada are the countries being represented.

The cultural experiences continue on into the evening with the Secure Energy World Snowmobile Showcase at the Allan & Jean Millar Centre. Food, refreshments and entertainment from around the world will be featured.

The final day of the Invasion (Sunday, February 15) gives riders another chance to participate in the World Snowmobile Rally/ASA Jamboree and it includes another Freestyle Show as well.

Ticket packages that provide various levels of access to the Invasion are still available but according to Brooks, they are selling fast.

“We are expecting about 25,000 people to either participate or spectate in the event,” said Brooks.

She is most excited for the World Snowmobile Rally/ASA Jamboree.

“I love snowmobiling and I can’t wait to ride into all the different countries and celebrate the uniqueness that each one will bring,” said Brooks. “It starts right at the Canadian Tire Welcome Centre (Senior’s Hall) with the Igloo—brought to you by Strad Energy. I am excited to see the kids and families enjoying the riding on our amazing trails. It’s going to be a pretty incredible time.”