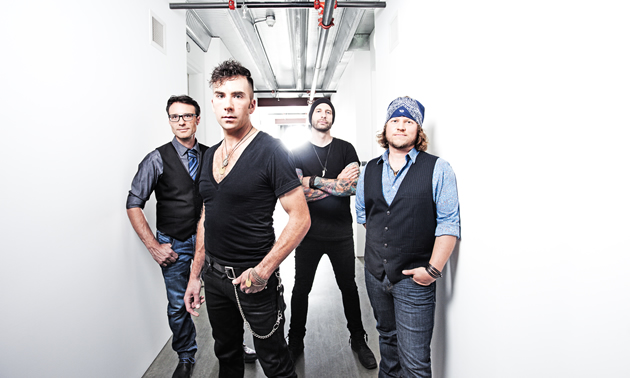 The Boom Chucka Boys are headlining the Western Canadian Festival (formerly called the Beer Fest) on Day 3 of the 2015 World Snowmobile Invasion (WSI) in Whitecourt, Alberta.

Who is this band whose members look a little less country, but not quite rock? Well, they’re from Sylvan Lake and it’s Ryan Langlois on vocals, Joel Rathjen on lead guitar, Teddy Michaylow on bass and Ben Shillabeer on drums.

Considered a country band (they were nominated for Group/Duo of the Year by the Canadian Country Music Association in 2014), the Boom Chucka Boys sound a bit like Johnny Cash with Elvis Presley, Dwight Yoakam, CCR, Bruce Springsteen and Dierks Bentley thrown in there as well. Ever heard of rockabilly? That’s them. But not quite. You get the picture. They seem to walk a fine line between genres but somehow manage to pull it off, appealing to the toe-tapping older crowd as well as new generation country music fans.

The “Boys” will be taking centre stage at the Allan & Jean Millar Centre in Whitecourt in the evening of February 13. Doors open at 9 p.m.

According to the Whitecourt Trailblazers snowmobile club, the group that is organizing the show, there will be a dance floor, food concessions and libations. Bring your cowboy hat because the theme is a country western bar.

For more info and tickets, go to the WSI website.