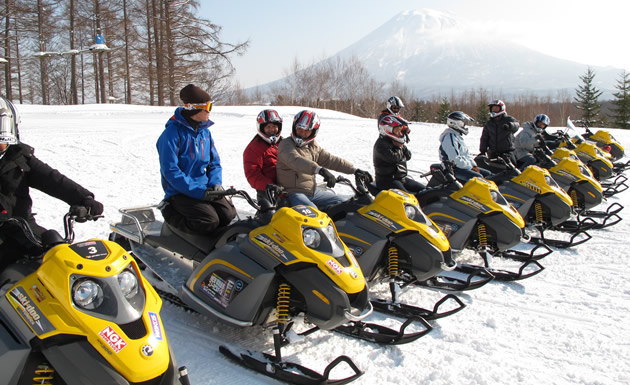 When you think of Japan, snowmobiling probably isn’t the first thing that comes to mind—unless, of course, you’ve spent the last hour researching it for your weekly World Snowmobile Invasion (WSI) blog. As it turns out, there’s a lot more to this island nation than temples, kimonos and cherry blossoms—all the images that a layperson (like me) would identify with Japan. Snowmobiling is actually part of the winter culture in Japan.

Although the major cities, like Tokyo and Osaka, receive only small amounts of snow, there are plenty of other locations in Japan that receive lots of snow. It’s a country of extremes, with southern Japan being in the subtropical climate zone and northern Japan being in the subarctic. The greater part of Japan is also made up of mountains so when the constant cold air mass that blows in from Siberia crashes into the mountains, the outcome is paradise for snow lovers.

Skiing and snowboarding are the most popular winter activities, and Japan is home to a shockingly high number of ski resorts—more than 500.

Snowmobiling isn’t near as prolific, but there are a number of tour companies and they offer everything from trail riding to boondocking and mountain sledding. Some of the ski resorts offer guided snowmobile tours as well.

The best ski resorts and snow conditions are reportedly found on Hokkaidō, which is the northernmost island in the Japanese archipelago. Hokkaidō is also home to Whitecourt, Alberta’s sister town of Yūbetsu. Now you get it—the ties that exist between these two towns is the whole reason why we are even talking about Japan in the first place.

As one of the countries being represented at the upcoming WSI, the Whitecourt Trailblazers thought it was important to have delegates from their sister town attending, and so they have invited a couple of snowmobilers from Yūbetsu to make the trek overseas.

There will also be representatives from the Embassy of Japan in Canada and the Consulate-General of Japan attending the WSI. So if you’d like to meet them and learn more about their fascinating country, plan to attend the Secure Energy World Snowmobile Showcase on Day 4 of the WSI where the delegates will be hosting a ceremonial sake demonstration. Tickets are available online.

Next month, we’ll take a look at our final and favourite snowmobiling nation in this blog series—Canada.