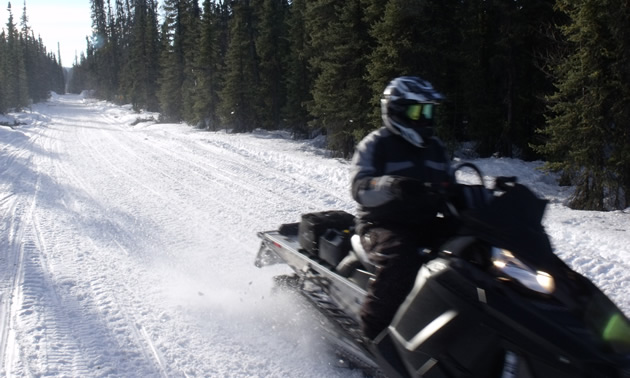 If you’ve ever wanted to ride central Alberta’s famed Golden Triangle snowmobile trail but lacked the courage to do the entire 350-kilometre loop by yourself, here is an opportunity you won’t want to miss.

Kicking things off on the first day of the World Snowmobile Invasion (February 11 to 15, 2015) will be a guided tour of the Golden Triangle. Led by Ken Linford, who is past president of the Whitecourt Trailblazers, the tour will begin at 9 a.m. at the Seniors' Hall in Whitecourt, Alberta, and it will take place over the course of two days.

“The first day, we are going to Swan Hills and will be meeting up with the Swan Hills Snow-Goers; they are hosting a lunch,” said Linford. “Then we are going to gas up and head over to Fox Creek. We’ll pull in there by four or five o’clock and have supper with the Northland Snow-Goers. Then we will park our sleds in Fox Creek at a compound, get on a bus and come back to Whitecourt.”

In the morning, after breakfast, participants will ride the bus(es) back to Fox Creek, hop back on their sleds and complete the final leg of the tour, Fox Creek to Whitecourt.

The tour is rated for intermediate to advanced riders, and Linford would like those who are interested in participating to preregister as soon as possible so that meals and transportation can be sorted out.

See it for yourself

The Golden Triangle trail is signed and groomed by members of the Whitecourt Trailblazers, the Northland Snow-Goers (in Fox Creek) and the Swan Hills Snow-Goers. The three towns it connects and the Woodlands County also play a part in the promotion and maintenance of the trail.

The terrain along the Golden Triangle is varied, ranging from flat, high-speed sections to fun, hilly spots. Along the way are scenic overlooks and shelters where riders can stop to warm up.

Powderhounds will have the most fun along the Swan Hills section of the trail. Due to its high elevation, the Swan Hills area typically sees above-average amounts of snow.

Linford said there is cell service along most of the Golden Triangle, but he cautions riders not to depend entirely on its availability.

“It’s all Crown land so you’re going through trails that we maintain,” he said, “but they aren’t ridden every day like the ones right around town. So there could be hazards that come up that we don’t know about, so you just have to pay attention.”

Updates are posted regularly on the Golden Triangle Trail website.

More information about the Golden Triangle Tour and the preregistration form can be found on the World Snowmobile Invasion website.