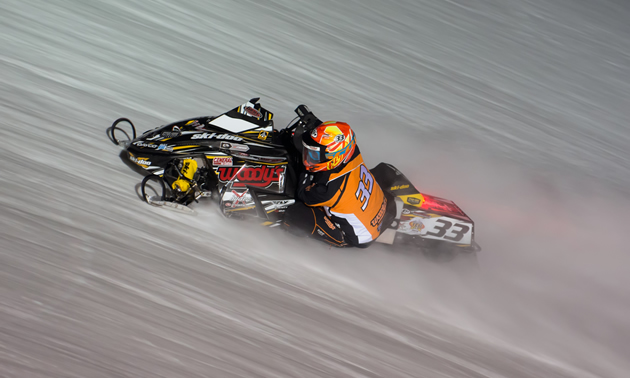 January 16 to 19, 2014, was the 51st Annual World Championship Snowmobile Derby at Eagle River, Wisconsin. With more than 25,000 fans looking on, Malcolm Chartier piloted his sled to another victory. The 25-year-old from Marine City, Michigan, was there to defend his title, and he made it look easy.

In the final, Chartier got the holeshot, gained an early lead and held onto it through all 30 laps, beating the competition by several seconds.

SnoRiders caught up with the 2013 and 2014 World Champion a week later to see what really happened and why he loves racing.

Where are you calling from?

I’m actually over in Alexandria, Minnesota. We’re getting ready to race this weekend. I just pulled up.

It’s about 24 degrees and sunny. It ain’t too bad.

So how did you get into racing?

My father started racing and I went along with him, watching. I kind of got involved by default. They started up a sled for me when I was really young and it progressed from there.

When did you turn pro?

You have a long list of career highlights. Which one is your favourite?

Since 2008, it has really progressed. We have gone in the right direction. Winning at the Eagle River World Championships last year was probably the most memorable. This year, of course, was great but being the 50th anniversary, it was pretty special.

What was it like going back to Eagle River to defend your title?

It looked like a pretty easy win. Was that the case?

Fortunately enough, we had a great start and I was able to get out front and once you are out front, you don’t have that snow dust and whatnot, so I was able to put my left down and stay consistent with my time and speed. Fortunately, I had done enough training in the summertime so I wasn’t as fatigued as I was in previous years. I think that helped. I was able to move forward through the race.

Tell me about the sled you’re racing this year.

Mike Houle, who is a former racer, built the chassis and it’s based off a Ski-Doo. It’s very similar to the one we had last year. We call it a replica but there’s some small changes we’ve made with the chassis and some performance things to improve on what we learned from last year.

Is that the only snowmobile you own?

No, we have two sleds that are race-ready. We’ll ride both sleds during practice and whichever one at that point feels better, we will choose.

What are your goals this season?

First off, we just want to have fun. That is what it’s really all about. It’s a hobby for us. I don’t get my income from this. My goals were to have a perfect season and to win the Eagle River World Championship. We won Eagle. I didn’t win all my races but maybe next year I can do that.

You won the 2014 season opener at Beausejour, Manitoba. Are you headed there again for the Canadian Power Toboggan Championships?

Right now, we’re not scheduled to. We’ll see how the momentum is going. We’re kind of in the middle of a seven-series race, it’s all back to back, so it’s a lot on the team so I don’t know if we will have enough momentum going into that. We want to make sure that when we do go, we have the full effort of everybody. For now, we plan on Eganville, Ontario, being our last event for the season.

When the season wraps up in March, what will you be up to?

I work a lot. I also ride motocross and when it’s warm enough, I go jet skiing. It’s a great cross-trainer.

What is it about the sport that keeps you coming back every winter?

I would have to say the people. We have such a great team and all my guys are spread out from Wisconsin to Minnesota so it’s seeing all those guys each weekend. And it’s the competitive side of it. I like the adrenalin and what it takes to throw the sled into the corners.