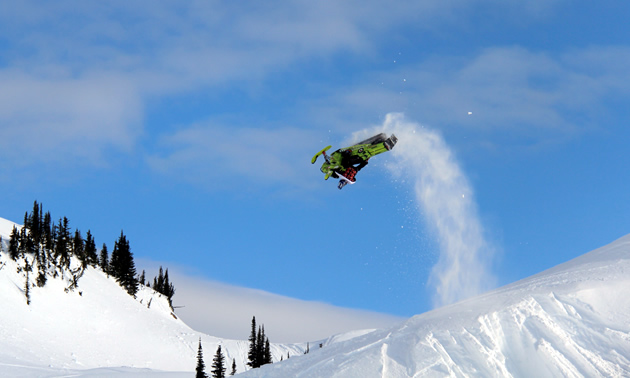 This photo landed Revelstoke, B.C.’s Morgan Gamache on the front cover of Braaap 15 “Rise.” Watch for his segment in the movie. photo courtesy Morgan Gamache

It’s the beginning of September and we’re busy here at SnoRiders, preparing our first issue of the season for print. But if there’s one thing to distract a writer from getting her work done, it’s the latest snowmobile movie trailers. By now, almost all are available for viewing on YouTube.

The first to catch my attention was Trax—a new snow bike film documenting the evolution of these crazy hybrids. Maybe it was by coincidence that I stumbled across this trailer first, or by the fact that I’m working on a big story about the newest Canadian-made snow bike kit that’s hitting markets this fall (stay tuned for details). Whatever sort of serendipity was at work, it will be exciting to see the full-length feature film.

As usual, it looks like all the filmmakers have done a great job of capturing last winter’s sled action, and the riders, well, they’re always pushing the envelope, constantly leaving us wondering, "what will they possibly think of next?"

It’s inspiration for the winter to come, but as usual, kids, don’t try this at home.

Morgan Gamache of Revelstoke, B.C., returns to the 15th installment of Jaya Lange’s Braaap series. The usual snow bike suspects, Reagan Sieg and Brock Hoyer, are back as well.

It looks like Cam “Hollywood” Hicks had to dig deep into the West Koots of B.C. to find any good snow last season, but he managed to score some sweet segments for his latest film.

Big Jim Phelan, the six-foot-seven-or-something Montanan, has created his own following of Thunderstruck fans over the years, and this year, he’s not letting any of them down.

With Chris Burandt, Kalle “KJ” Johansson and Cody Borchers in the mix, this will be the video that throws a little bit of everything into the pot. And the intro will give you a chuckle.

The four-time Sledfilm Festival winner, 509, is calling Volume 10 its best snowmobile film to date. It’s a little redundant, but the slo-mo intro still gives me goosebumps.

Jumps, climbs, stucks and bleeped-out backcountry banter, this is how the story of sledding goes for most of us real-world riders.

Dan Gardiner and the Boondockers crew obviously knew where to look to find the powder last winter. Don’t be surprised if you start drooling through this one.

Trax "The Evolution of the Snowbikes"

Snow bikes have been creeping into our snowmobiling films lately. Here’s one that’s dedicated entirely to the one-ski phenomenon.

Wonder what it was like in Newfoundland and Labrador with the all the snow they got last winter? Evan Brake from Corner Brook, NL, takes us on a trip to his home turf.