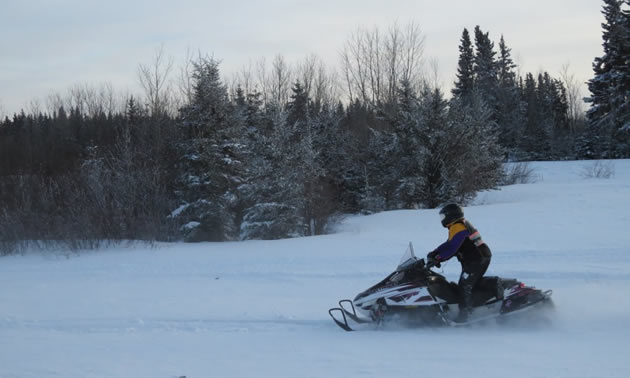 Carol Lueken riding along the trail going to Elk Ridge north of Prince Albert last year. She had just come off one of the trails from Emma Lake and was riding down Highway 2 North. Photo courtesy Carol Lueken

For a thrill seeker like Carol Lueken, riding in and around Prince Albert, Saskatchewan, couldn't be better. With the incredible amount of snow the area gets, along with an amazing groomed trail system and infinite off-trail possibilities, Lueken enjoys spending her winters in this snowmobiling paradise.

Lueken is the president of Prairie Women on Snowmobiles, a non-profit organization that organizes provincial awareness events to focus attention on snowmobiling as well as raise funds for breast cancer research. But on a beautiful day in the middle of January last year, Lueken was riding for pure pleasure. With some friends along, she experienced one of the best rides of the season.

"It was an amazing day," said Leuken. "We were riding in between the bushes where there was no trail. It wasn't groomed, so we were making our own trail. There were drifts where the wind had blown in, and when you hit the drifts you couldn't see for a minute and there was snow flying everywhere. It was so much fun."

Lueken lives in Emma Lake and on that day she headed up north of Prince Albert from her home to meet her five friends. They did some amazing off-road trail riding and deep snow riding in the fields and worked their way over to Candle Lake and then back down to her home at Emma Lake. They did a little over 300 kilometres that day.

"We had breakfast, lunch and supper on the trail," said Lueken. "It was just so beautiful, with the heavy snowfall on the trees. It was so picturesque, being out in the middle of nowhere having a wiener roast. It was really virgin snow; it was so exciting."

Last year was overall an amazing year for snow and Lueken said they spent quite some time out in the open fields in the deep powder.

"There was so much snow last year that sometimes when you got off your snowmobile in the fields you were waist- to chest-deep in snow," she said. "It was almost like you were bench pressing your sled to get out of the snow."

So for the upcoming season, Lueken is definitely hoping for more of the same.

"I hear there's supposed to be as much snow this year as last year," she said. "So I'm looking forward to another great year of riding and the adventures the deep snow brings in snowmobiling country. It was phenomenal last year; you could go anywhere and sled anytime."

According to Lueken, Prince Albert definitely has a lot to offer. Not only is the trail system top-notch, but the off-road riding is second to none.

"I am a thrill seeker, so any time I can jump drifts or do heavy snow riding I'm happy—and that's riding at its best," said Lueken. "The absolute best is if you're doing a bit of off-trail riding in deep snow, then doing some trail riding, getting into a warm-up shack or having a wiener roast outside the shack on a nice day. It is the enjoyment of that with friends and family that is a perfect day in winter for me."

Why is it your favourite? It has a lot to offer, whether you're going into trails which are heavily treed or some off-trail riding. The scenery is so picturesque. 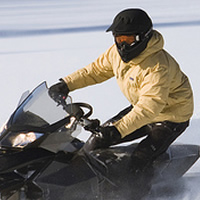 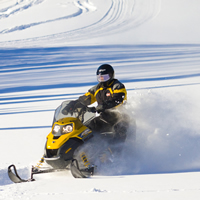 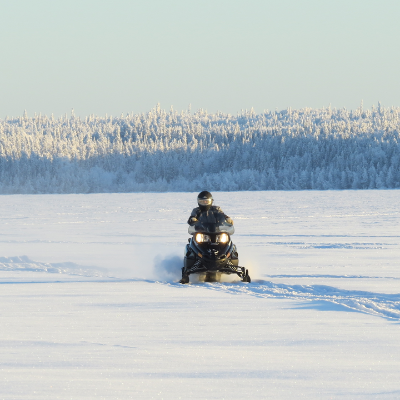