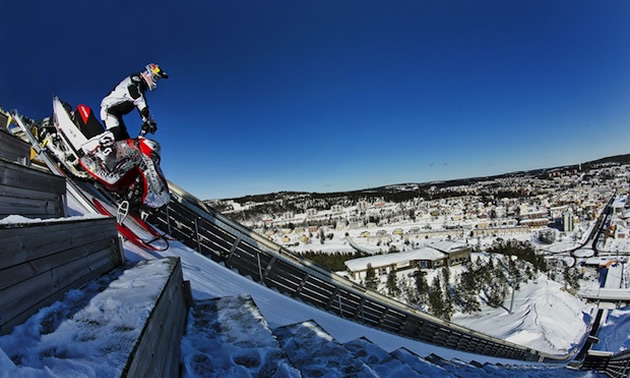 Daniel Bodin is one of the riders who will be featured at the upcoming World Snowmobile Invasion. Anders Neuman/Red Bull Content Pool photo

BRP and Polaris are sponsoring the freestyle events at the upcoming World Snowmobile Invasion in Whitecourt, Alberta. We’ve already told you that Levi LaVallee and Sam Rogers are going to be there, but can you guess who else?

Daniel Bodin, Joe Parsons, Willie Elam and Fred Rasmussen! If one or all of these names don’t sound familiar, here’s a little info about each rider to refresh your memory:

Daniel Bodin >> Whether it’s on a dirt bike or a snowmobile, Swedish freestyle legend Daniel Bodin is rarely seen right side up. In 2008, he even set a world record for longest backflip on a sled (44.8 metres). He’s a familiar face at X Games and he’s got three gold medals from the snowmobile best trick and snowmobile freestyle competitions to prove it. You wouldn’t have seen him at X Games this year, because he’s been on Travis Pastrana’s Nitro Circus tour in New Zealand. The crazy Swede will be back in North America soon, though, to throw down some of his gnarliest tricks at the World Snowmobile Invasion.

Joe Parsons >> Joe Parsons holds a couple of world records—one for the longest jump with a trick and another for the longest jump on a 440 cc snowmobile. The 27-year-old from Yakima, Washington, also has three gold medals and seven silver medals from the X Games. His most recent silver medal is from the Snowmobile Speed and Style event at this year’s X Games in Aspen, Colorado. Parsons also an accomplished backcountry rider and a former snocross racer.

Willie Elam >> Another snocross-turned-freestyle guy, Willie Elam spent the early days of his career racing for the Blair Morgan Racing Team on the national snocross league in the U.S. He also competed for Warnert Racing and Scheuring Speed Sports before switching his focus to freestyle. After some practice in the foam pit with Heath Frisby, Elam started doing freestyle shows and now he’s a regular competitor at X Games. Elam hails from Buhl, Idaho.

Fred Rasmussen >> Fred “Fuzzy” Rasmussen is a professional snowmobile freestyler from Ludington, Michigan, who started riding sleds and dirt bikes when he was 12 years old. The now 30-year-old spends his weekdays building retail stores and his weekends flipping sleds with the Rave X Outer Limits Tour.