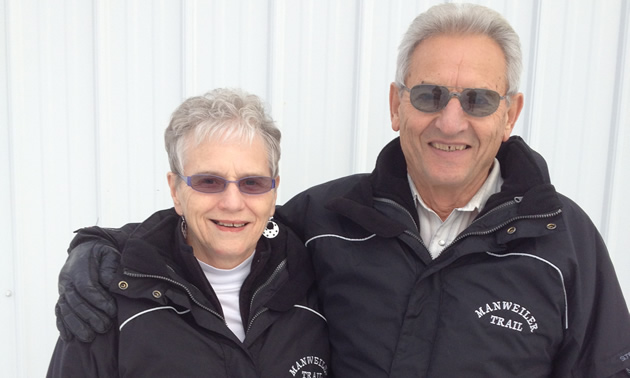 Louise Sherren, the first executive director for the Alberta Snowmobile Association (ASA), volunteered with the association for close to 35 years. In appreciation of her service and support, an award was created in her honour: the Louise Sherren Lifetime Achievement Award.

The second recipient of the award was Dale “Gundy” Gunderson of Whitecourt, Alberta. Now, five years after Gunderson’s death, his best buddy, Alex Manweiler, has also been honoured with this award.

The scope of the job

Manweiler is retired from his position as superintendent of works for the Town of Whitecourt, but his volunteer work with the Whitecourt Trailblazers snowmobile club is keeping him as busy as he’s ever been. He was one of the club’s founding members back in '79, just three years after he moved to Whitecourt from Meadow Lake, Saskatchewan, and five years after he and his wife, Karen, bought their first snowmobiles. They have been faithful Polaris owners ever since, and active members of the club for more than 30 years.

Manweiler is involved with the club’s routine, time-consuming tasks of trail clearing and grooming, and he heads up the special projects aspect of the club. This means that he’s the go-to guy for trail restoration, development and expansion, as well as equipment purchase—the club has just taken delivery of a second groomer—and anything that falls outside routine club activities.

In 2008, with funds received from the government of Canada’s Economic Action Plan, the Trailblazers were able to do trail improvements and 100 kilometres of trail extension. One new 48-kilometre stretch lies near the Windfall gas plant and connects the southern portion of the trail system to the Gundy rest area and warm-up shelter on the Golden Triangle trail. Manweiler’s suggestion to name that trail the Windfall was overruled by the club membership; instead, the members decided to name the new trail the Manweiler, to honour his and Karen’s long and valued support of the club and Alex’s long friendship with Gunderson.

“For the annual media ride last year, Dale’s son insisted on trailering Karen and me to the staging area,” Manweiler said. “When we got there, it turned out to be the grand opening of the Manweiler Trail. The town dignitaries were all on hand, as were the media and MLAs for the area. The whole community—including my own wife—kept it a secret from me!”

He keeps on ticking

In April 2011, during his last ride of the season on the Manweiler Trail, Manweiler’s skis broke through the snow, flipping his sled. He was riding with a group and decided to continue the ride despite a very sore shoulder. He was later found to have torn his rotator cuff and underwent a surgical repair in early October this year.

Fortunately, Manweiler is making an excellent recovery and hasn’t slowed down much at all.

“Lots of oilfield activity with drilling and seismic work this year means that in one area of our trail system there are six new road crossings, which is a major safety issue,” Manweiler said. “These crossings all need signage, and while the oil companies fund us for the costs, the club members do the work.”

With all this work to do in addition to the usual early-season tasks, Manweiler said some of his fellow volunteers were heard to speculate about the possibility of arranging to injure his other shoulder just so he’d cut them some slack!

Manweiler appreciates the efficiency of the Trailblazers organization.

“We’re fortunate to have a really good structure to the Trailblazers club,” he said. “It’s run by business people who run it very efficiently, with people responsible for areas like community liaison, special projects, trail bosses and like that. Everybody works together. The community sees how well the club functions, so it’s easy for them to jump on board and support us.”