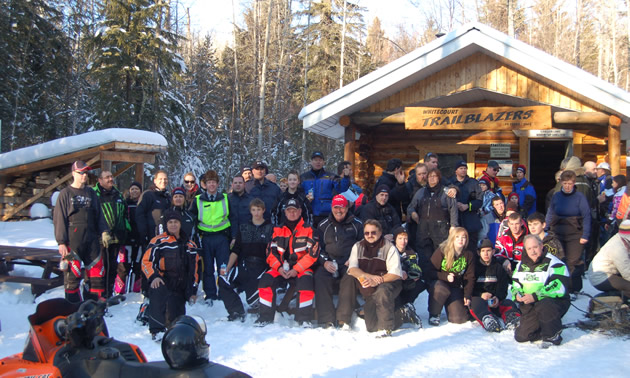 The snowmobiling enthusiasts in Whitecourt, Alberta, take seriously their town’s designation as snowmobiling capital of the province. They raise funds for trail maintenance, shelters and equipment, and they put time and effort into keeping the trails clean, accessible and safe.

“Fundraising is our biggest challenge,” said Ken Linford, president of the Whitecourt Trailblazers snowmobile club. “It’s pretty tough to raise enough money at a bake sale to pay for the fuel to run our groomers for 500 hours a year, so we have to think big.”

Trail passes are available from most members of the club and at the Whitecourt Garden Market IGA, RPM Powersports Ltd., Adrenaline Powersports Ltd. and Mohawk First Choice Truck and Car Wash.

Miles and miles of accessible trails

The Trailblazers club—with a membership roster of about 300—maintains almost 500 kilometres of trails, including 115 kilometres of the 350-kilometre Golden Triangle trail. The entire network, including the Golden Triangle, is accessible by snowmobile from the town of Whitecourt. If you prefer to trailer your sled to a staging area, the Groat Creek staging area lies about 15 kilometres south of town on Highway 32 and the Eagle River staging area is located about 10 minutes west and north of Whitecourt, also on Highway 32.

Ordinarily the trails are groomed from mid-December to the end of March, but the grooming season depends on weather conditions, of course.

“We try to build and maintain the trails to be family-friendly, so that they’re accessible for all skill levels of rider,” said Linford. “There’s no really difficult ride, in normal conditions, and we have good signage to warn about hazards. You can ride right from town to all of our trails.”

The longest of the trails south of Whitecourt is the Summit Trail, extending 90 kilometres from Whitecourt to Silver Summit Snow Resort near Edson. There is a warm-up shelter with facilities at Kilometre 30 from Whitecourt. The Summit Trail intersects with the other three established trails in the area, allowing for lots of variety.

Detailed, up-to-date maps of the trail network are available for download on the Trailblazers website, which gets updated at least once a week; there’s even a smartphone version of the map. The map describes the trail amenities in detail—the staging areas, the warm-up shelters and the lookouts—including how to get there. The information is clear and comprehensive.

“There are QR codes on the maps at the staging areas, so you can save the maps on your phone,” said Linford. “We didn’t have anyone reported lost last year, so it appears we’ve improved things quite a bit!”

Invited to the party

The Trailblazers’ annual media ride is scheduled to take place on January 30, 2013. Whitecourt’s mayor and local MLA will be there, along with representatives from the Alberta Snowmobile Association in Edmonton, the Alberta Tourism minister and sledding clubs from surrounding communities, making this an important mid-winter event that encourages tourism and supports the local economy.

Linford kindly extended an invitation to me to attend the media ride, promising to have a sled available and to teach me the rudiments of driving the machine, as I've never ridden a snowmobile.

“If you stay on the groomed trail it’s like driving a go-cart down a track. If you can hang on, you’re good,” he said.

It sounds like fun, and I must say I’m tempted.