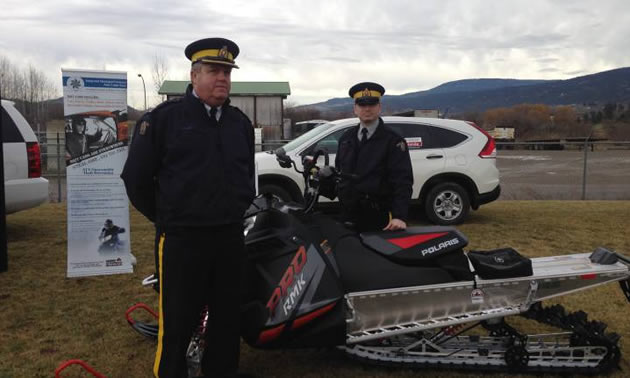 We recently ran an article about an RCMP “bait sled” thief who was sentenced to one-year in jail because he and a buddy (who was never caught) stole a planted bait sled and truck in Revelstoke last winter.

While the majority of readers who responded to the story said that the thief got exactly what he deserved, there were others who suggested using “bait sleds” to catch criminals is entrapment and therefore unethical.

According to Wikipedia, "In criminal law, entrapment is a practice whereby a law enforcement agent induces a person to commit a criminal offense that the person would have otherwise been unlikely to commit. It is a conduct that is generally discouraged and thus, in many jurisdictions, is a possible defense against criminal liability."

So what are your thoughts? Should the RCMP use “bait sled” sting operations to capture would-be snowmobile thieves? Is it fair game or is it entrapment?

Here is how the RCMP explained the program when it was launched back in 2014:

"As a mecca for snowmobilers, Revelstoke and Sicamous, British Columbia (B.C.), have become hot spots for opportunistic thieves.

Last winter, after years of dealing with increasing theft in the areas, two RCMP detachments committed to doing something about it. Sgt. Dave Dubnyk, detachment commander of the Sicamous detachment, and Cpl. Thomas Blakney, Revelstoke detachment, connected with B.C.’s bait car program, operated by the Integrated Municipal Provincial Auto Crime Team (IMPACT), about using bait sleds and trucks to catch thieves in action.

“We were getting pressure from many different angles, so that was really the motivation for stepping up and rolling out this bait sled initiative,” says Dubnyk.

The bait program uses GPS to track the bait vehicle that’s been stolen. Police then follow the vehicle and remotely power it off when they’re in position. The detachments rolled out the program early last winter with a media event to generate buzz.

“Just as much as we had an interest in catching someone with the bait sled, we had an equal interest in straight prevention and not having a theft in the first place,” says Dubnyk.

In addition to the bait vehicles, which weren’t stolen this year, the detachments used leaflets to educate the public on what to do to prevent theft, and for the first time they were able to grant overtime to increase patrols. As a result of their efforts, there were fewer thefts in Sicamous and Revelstoke than the two previous years, which is still too many says Blakney.

“It did extremely well,” says Blakney. “I can tell you that the stats went down with just having the word out there that the RCMP had bait sleds.”

Next year, Blakney hopes to expand the program with more higher-end bait vehicles that will be more appealing to thieves so they can get the numbers down to zero.

“With the high-end bait sleds, trucks and trailers, it really is what the program is about—baiting the bad guy into taking them,” says Blakney. “If we put those into play, I think our units would be taken and we can catch those responsible.”

So what are your thoughts? Is it unethical? Is it entrapment? Or is it just good old-fashioned law enforcement at work for the police to plant “bait sleds” in popular snowmobile destinations to try to lure would-be criminals into stealing the snowmobile and truck?

Here's a link to the original article.