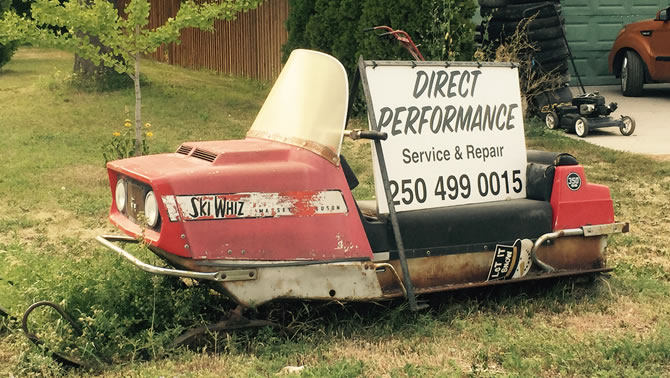 An oldie but a goodie—a vintage Massey-Ferguson Ski Whiz snowmobile finds a new use as an advertising prop. Photo by Keith Powell

When I drove by this "sign" in the B.C southern interior town of Keremeos I took a double take and made a quick u-turn at the same time.

"That's a vintage Ski Whiz sitting right beside the road!" I shouted to my wife who rolled her eyes, shrugged her shoulders, and kept on reading her novel.

Yes, this classic old sled was doing double duty as a eye-catching sign for a local business called Direct Performance Service and Repair.

The Ski Whiz harkens back to the good ol' days (or bad old days depending on your perspective) of snowmobiling back in the late 1960's and early 1970's—just before the oil embargo flattened the already struggling snowmobile industry of the day.

The Ski Whiz was manufactured by the farm tractor company Massey-Ferguson out of Des Moines, Iowa.  As one snowmobile journalist wrote of the Ski Whiz at the time, "The tractor people are in the snowmobile market with a lightweight, mid range machine.  A large dealer network put M-F in the running the first year out and they have continued to hold their own."

There were over 20 snowmobile manufacturers back in this era including brand names like Alouette, Chaparral, Evinrude, Harley-Davidson (yes, the motorcycle people), John Deere, Johnson, Mercury, Moto-Ski, Northway, Raider, Rupp, Scorpion, Skiroule, Ski Whiz, Sno-Jet and Suzuki—not to mention the four OEM we know so well today like Ski-Doo, Arctic Cat, Polaris and Yamaha.

It was claimed that "agricultural giants like John Deere and Massey-Ferguson sometimes used their lines of snowmobiles as “throwaway” enticements to their largest snow country-based farmers to keep them buying those very profitable combines and harvesters in the early 1970s," while others claimed that the boxy Ski-Whiz, "looked more like a yard tractor than a sporty trail sled."

Whatever your take on the Ski Whiz might have been, it was sort of cool to be reminded of the golden age of snowmobiling while cruising along in the summer heat on B.C's serpentine Highway #3 while passing through a town better known for its fruit stands than its vintage snowmoblles.