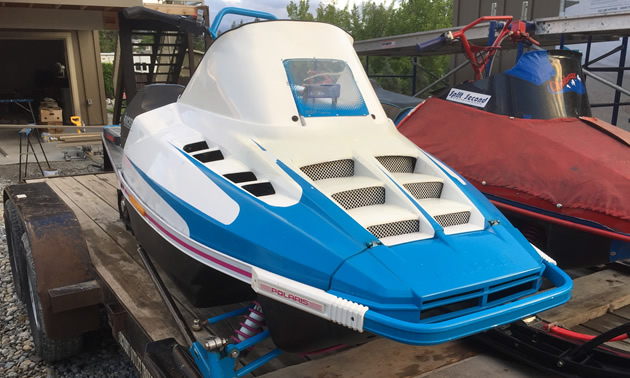 The last time we wrote about Cam Webber he described his early mountain sled conversion project on a 1997 Polaris – in what might have been one of the earliest forays into building a truly dedicated sled for mountain riding.

At the time Cam told us, “Weight is the enemy of mountain riding. So my biggest objective was to strip as much weight out of the sled that I could without impacting on the structural integrity of the machine.”

Though Cam is semi-retired from snowmobile riding, he still does gets out once in a while. In addition to the above mentioned 1997 Polaris custom modified project sled he also owns a 1996 Polaris as well. We asked Cam about this eye-catching powerhouse of a machine as well.

“It was owned in Sparwood, where I lived at the time, by a well-known snowmobile rider named Kenny Paniec. Kenny really did most, if not all, the work on the snowmobile before I ever got it,” said Cam Webber.

“Kenny purchased it as Polaris factory XCR sled with 600 engine, but he wanted to light-weight it and customize the machine to boost its horsepower. I understand he had the chassis done by a company called Baker Boys Performance out of DeWinton, Alberta. Kenny replaced the factory rotary valve 600 engine with a 670 and bored it out to be a 740 cc — I think he used a company called Split Second Performance in Valley View,” adds Cam. “This made the machine really hop and it Dyno'ed out at 155 hp. Coupled with the fact that it had been light-weighted with chrome moly tubing, then had a customized lightweight hood added and even small things like the heavy light box taken out – it made the machine a lot lighter. I believe there was 136” original track on it and was upgraded to 144” track with 2” lugs and custom racing shocks were added.”

Cam says he has owned the snowmobile for over 6 years and it's still a fun ride – when he has the time and ambition. Thanks again to Cam Webber for sharing his story of Sparwood's Kenny Paniec's customized Polaris XCR.