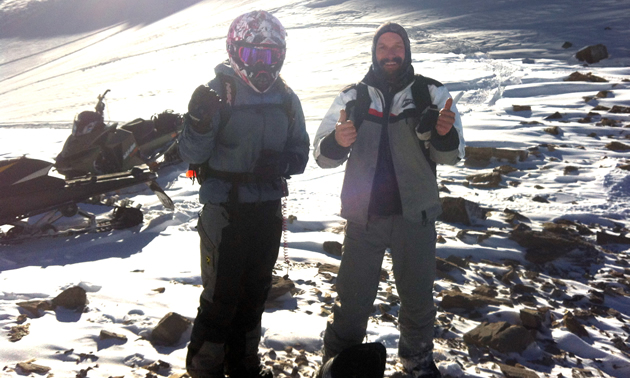 “My daughter, Shelby, loves the snow,” said Dean Ingram of Edgewater, B.C. “It’s her natural element. We both love winter—we thrive in the cold and put up with the summer. When Shelby was a baby, she’d find the last pile of snow in the yard to play in, and she loved to sit in her swing out in the cold. Now, she complains non-stop about the summer heat.”

Seventeen-year-old Shelby gets through summer by working full-time at the PetroCan station in nearby Radium Hot Springs and saving her money. In the winter, she usually works a few nights a week after school and goes sledding during the weekends.

Dean said that skiing together during Shelby’s childhood and snowmobiling together for the past four or five years have created an unbreakable bond between him and his daughter. Dean still enjoys skiing, but Shelby has hung up her skis in favour of her sled.

“I like the adrenaline rush and the noise and going fast,” Shelby said. “Now that I’m better at sledding, I kind of prefer to ride with my dad and his friends because it’s funner for me—I get to be more aggressive (than when I’m riding with my friends) and it’s more of a challenge.”

“We went to the ski hills together for years,” Dean said, “and it was getting harder and harder to find the fresh powder. When I bought the sled, I found I could make fresh tracks with my skis every time I went out. When Shelby grasped the idea, she took up snowmobiling and hung up her skis—she just loved everything about sledding. Often we double on the sled for the drive up, and then she rides the sled and I get to ski down.”

Both of the Ingrams have high praise for the sledding terrain surrounding their home. Dean listed tree riding, high alpine riding, bowls, creek beds and frozen lakes as being accessible from Edgewater. As of last winter, Catamount Glacier, just 20 kilometres from Edgewater, is open to snowmobiling from the Family Day weekend in February until May 31.

“Thunderwater and Whirlpool are two lakes that get frozen over, and that’s where we go until Catamount opens,” said Dean. “The area is quite well known and it’s really popular—we’ll often see 50 to 100 sleds up there, and lots of them are from Alberta. You’ve got to get out early to make fresh tracks, and I’m an early bird so I get to do that quite often.

“We usually buy a membership in the Windermere Valley Snowmobile Society because we like to support it, and once in a while we go up into the Golden (B.C.) area to ride Silent Pass and Quartz Creek. It’s a totally different area because you don’t get glacier riding. Silent Pass is mostly tree riding, but when you get up into the alpine there are big meadows and it’s wide open with three or four big bowls to ride in.”

“My favourite area is Forster Basin,” Shelby said, “because you can do everything from easy rides to advanced ones. My favourite thing to do is carving. Once the glacier opens, it’s a lot of fun riding up there—I like getting an early suntan out there in the spring.”

Shelby makes a point of doing a number of rides with The Betties Adventures, a snowmobile group for women of all ages from B.C. and Alberta. Portions of their rides are filmed, and at the end of the season they make a movie; Dean often helps with the filming.

“There’s an annual snow show in Golden where we preview our movie,” Shelby said, “and we premiere it in Edmonton. Throughout the season, we will host some sledding events including  a newbie ride in Golden in February, where you bring someone who’s never sledded before and show them what it’s like. I tell the newbies to just do it—it’s an incredible experience.”

Ordinarily, by mid-October Shelby and Dean are looking for fresh snow on the mountains surrounding Edgewater. This year Shelby has an extra need to be patient—she broke her collarbone on the Labour Day weekend. By the time conditions are perfect for sledding, though, she’ll be revved up and ready to ride.