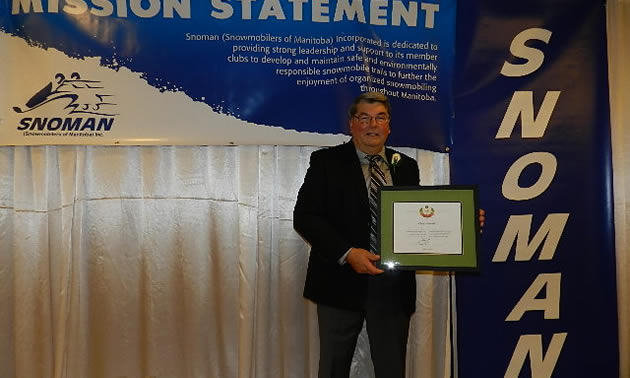 On November 10, 2012, Ernie Smelski took home the Queen Elizabeth II Diamond Jubilee Medal at the second annual Snoman Congress. Smelski is the past president of Snoman Inc. (Snowmobilers of Manitoba).

The medal, of which 60,000 will be handed out this year to deserving Canadians, was awarded to Smelski for his incredible contributions to snowmobiling in Manitoba. A pioneer in the industry, Smelski got involved with Snoman officially in 2000 but has been part of the organization indirectly since about 1994.

“I was very honoured to be presented the medal for the province of Manitoba on behalf of Snoman,” said Smelski. “Basically, it means a lot to me and I’m very grateful to be working with a great team at Snoman that have helped make my efforts successful over my three terms as president.”

Back on the farm

According to Snoman, Smelski’s snowmobiling days go back to when he was on the family farm near Dauphin, Manitoba; in 1963, he would ride his dad's Polaris sled to do the farm chores. His snowmobiling interests continued on throughout his 38 years in Manitoba Conservation. Employed in 1969, Smelski worked through the ranks of resource officer and management around the province, working with many communities and organizations until his retirement in 2008.

For the past 24 years, Smelski has been involved in the organized recreational snowmobile program, developing programs, policies and guidelines relating to snowmobile safety, risk management and infrastructure. He has contributed significantly to the betterment of Snoman and recreational snowmobiling in Manitoba as the conservation representative on the board of directors of Snoman from 2000 to 2008.

Stepping up his involvement

In 2008, Smelski became vice-president of Snoman and was then elected president for three terms—from 2009 to 2011. His resumé is nothing short of impressive.

“I got into the program in 2000 and was certainly able to accomplish a lot of the objectives of the organization,” said Smelski. “I developed policies and procedures particularly for risk management—being that snowmobiling is a slightly higher risk recreation. Hence, we needed to protect volunteers and clubs and therefore needed to have policies and procedures for the organization, partly in terms of liability.”

Smelski played an integral role in creating other programs such as trail signing and the trail audit program. He’s also responsible for developing programs for training, including online training for volunteers who are located outside large centres. In larger towns and cities, Smelski helped provide on-site training for clubs.

“This is a huge accomplishment in my mind,” said Smelski, “and that has been said to me by many people within the organization.”

The betterment of trails

Snoman has been very successful with the Integration of the Snopass program and the National Trails Coalition program thanks to Smelski.

“In regards to our Integration of the Snopass (program), it enables us to sell and provide a pass to Manitobans through Manitoba Public Insurance (MPI) and hence, made it more effective to offer services across the land,” Smelski said. “It basically provided less work for the volunteers as well and allowed them to focus on more safety aspects—including grooming trails and doing other pre-season work.”

Smelski said the National Trails Coalition program that Snoman applied for was also extremely successful and saw collaboration from the federal and provincial governments.

“During my time, through the efforts of my team members, we applied for over a million dollars' worth of grants from both levels of government—which had never been achieved in the organization’s history,” he said. “That was a huge accomplishment for us and I’m very proud to be a part of that.”

The money went towards improving infrastructure and safety, as well as developing the trail network. The organization was able to improve grooming and trail signage on some 12,000-plus kilometres of trail. Providing more shelters also became possible, and the success of the National Trails Coalition was key.

“It allowed us to link up communities particularly in the central and western regions,” said Smelski. “It gave snowmobilers the opportunity to travel from east to west on a groomed trail, and we had never had that opportunity before. It definitely enhanced our ability to move snowmobilers from one end of the province to another on a groomed trail.”

A slight shift but still involved

Even though Smelski is retired and holds the position of past president, it doesn’t mean he is not a crucial part of Snoman. He spends most of his winters now in Arizona—but even while enjoying the southern life, Smelski is active in meetings and discussions with Snoman. He still provides consultations to various committees within the organization and offers a lot of mentoring. He has also been active as the second vice-president of the Canadian Council of Snowmobile Organizations (CCSO) and was able to bring a number of the CCSO's programs in sync with the province of Manitoba so that policies are consistent across the province.

“Throughout Manitoba, there is a huge supportive system from the business sector in regards to snowmobiling,” said Smelski. “Snowmobiling is a very important part of the economic benefit, especially to smaller communities. Restaurants, hotels and gas stations alike depend on the snowmobiling sector and it’s very comforting to see business thrive in smaller communities (that) in winter rely on that economic boost. It’s very gratifying to see.”

Smelski said snowmobiling provides $230 million of economic benefit within the province and he’s thrilled to be recognized for his hard work in the industry over the last two decades. 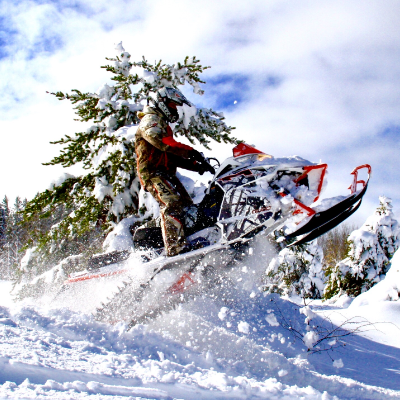 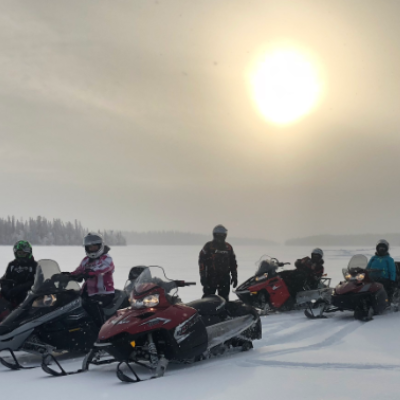