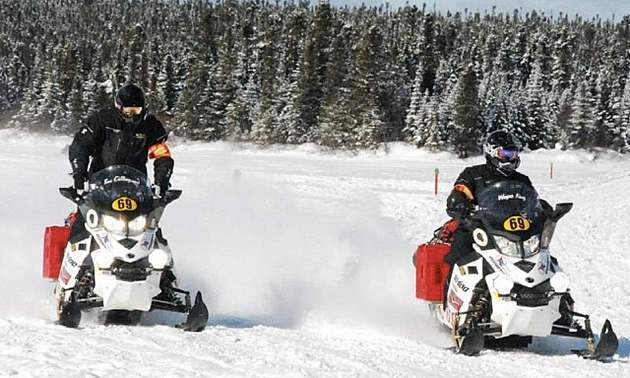 Tom Collingwood and Wayne King were running in the top 10 on the last day of Cain’s Quest in 2012 when a blown engine forced them out of the race. They're ready for another attempt. photo courtesy Tom Collingwood

Tom Collingwood, 36, doesn’t think of himself as an extreme sports enthusiast but he’ll have to become one to complete Cain’s Quest 2014.

Billed as Canada’s longest snowmobile endurance race, Cain’s Quest is a six-day, 3,300-kilometre journey through the wilderness of Labrador. It takes place every two years and this year, 30 teams from all over Canada have signed up.

Collingwood—who is an avid mountain sledder from Whistler, B.C.—will be racing alongside his friend and teammate Wayne King from Happy Valley-Goose Bay, Labrador. It will be their second attempt.

The duo entered Cain’s Quest in 2012 and nearly made it to the finish line.

“We were running in the top 10,” said Collingwood. “We knew we had seventh spot in the bag and it was only a matter of catching a couple of people to grab fifth or fourth and then the motor blew and that just took us from hero to zero.”

They were in a remote part of Quebec when the engine blew and it took them 18 hours to get back to civilization.

“It was really tiring and horrible,” said Collingwood. “Once we towed the broken sled back to Northern Quebec, the only ways (to get) home were to wait for the sea ice to thaw, thereby allowing ship passage, or to charter an airplane to haul the two sleds back to Labrador. We chartered an airplane 24 hours later, once the weather permitted, and arrived back in Labrador broken and battered.”

It took awhile for the effects of the race to wear off.

“My hands were like frozen claws for about a month afterward,” said Collingwood.

The glory of it

Collingwood swore he would never compete again, but when the dates for Cain’s Quest 2014 were announced, he added his name to the roster.

“They only do it every two years,” he said. “That’s to give the volunteers a break but I think they also do it to make the racers forget about the pains of it all and think about the glory.”

“If you win first place, it will offset some of your costs (to race) but you’re pretty much doing this to test yourself,” he said. “It’s to figure out where you stand as a rider.”

Then there’s the camaraderie.

“When you’re running midweek and half the pack has dropped out and it’s only the true survivors left,” he said, “you become friends with everyone and you become more of a tighter group. That’s kind of neat. You enjoy that aspect of it.”

What it takes to compete

With entry fees, travel expenses, fuel and snowmobiles, it’s not uncommon for racers to spend more than $50,000 on Cain’s Quest. And it takes months to plan.

Collingwood started prepping for the race back in June 2013. His preparations included modifying two new 2014 Arctic Cat XF 7000 snowmobiles to carry extra gear and run in deep snow as well as places where there is no snow at all.

Collingwood and King have an idea of the conditions they will encounter but this year’s race will take them into a part of Labrador that they haven’t seen before.

“It’s a whole different part of Labrador this time,” he said. “We will get to see more coastal communities.”

His family and friends will, of course, be tracking their progress online, and you can too. Visit the Cain’s Quest website and click on Tracking. The race starts March 1.