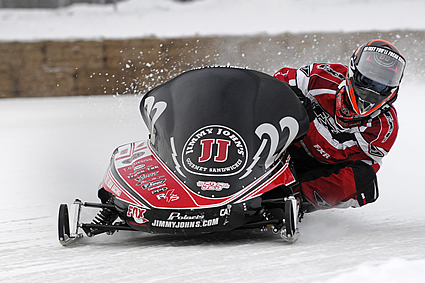 Brandon Johnson leans hard into a corner, on his way to winning the Pro Champ 440 final at the Season Opener of the Canadian Power Toboggan Championships. Rob Bye photo

Ice oval racing is the Formula 1 of snowmobile competitions, and this series begins and ends at the Canadian Power Toboggan Championships in Beausejour, Manitoba.

Last year's season opener failed to take place, due to unseasonably warm temperatures. That was the first time this early December ritual ever had to be canceled. This year, Manitoba had more normal weather, leaving Beausejour's big half-mile ice oval track in prime condition.

All the big guns were there, and some of them had new technology to unveil. One team whose machines drew a lot of attention was that of driver Nick Van Strydonk. The team spent a good part of the off season designing and building a new cowling for their sled. Based on the aggressive, angular lines of the Polaris Rush, it looked positively fearsome and attracted admiring stares in the pits. Unfortunately for the team, it took four motors to limp through the weekend, so clearly they still have work to do under the cowling.

The top class saw a nice mix of drivers and machines going home with trophies. Victory in the Grande Finale, Pro Champ 440 was won by Brandon Johnson of Holt, Minnesota on his 2011 Wahl Brothers Polaris. The runner up was Marine City, Michigan's Malcolm Chartier on a 2011 Houle Skidoo. Third place was claimed by 2011 Arctic Cat driver PJ Wanderscheid from Sauk Centre, Minnesota.

Beyond the champ classes, there was also a strong field of entries in every other class, with a noticeable increase in the number of local drivers and teams taking part. Having the world's finest ice oval track at their disposal, it's refreshing to see more Manitoba racers taking an active interest in the sport. That interest is sure to grow, as Beausejour is now also home to a kid's oval racing series, with their own dedicated track having been built adjacent to the main circuit. The kids can get inspired by watching the big sleds, then tear up their own little track on their 120s and Kitty Cats.

The 2011 ice oval season will wind up at the 49th annual Canadian Power Toboggan Championships, to be held March 5 and 6, 2011, in Beausejour. It's already shaping up to be a hotly contested series this year, so the final champion will very likely be crowned at Beausejour. You can be sure of an exciting weekend of races.

Looking ahead another year, 2012 will mark the 50th running of these championships, and organizers are already hard at work making special plans. Anyone wishing to contribute their time, expertise and/or memorabilia to this upcoming celebration is asked to contact the CPTC at [email protected]