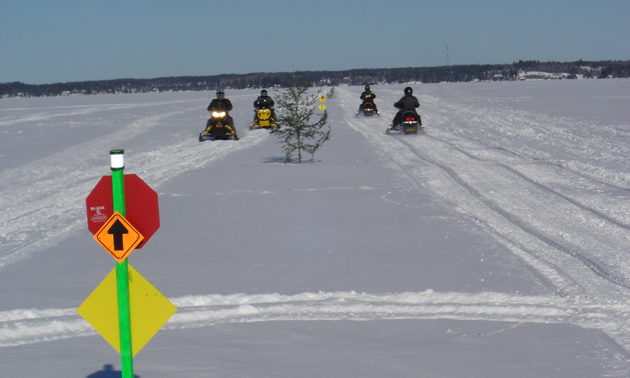 Whether they're coming in or going out, these sledders have a perfect day to enjoy Manitoba's Whiteshell Provincial Park. Cora Tschetters photo

Carol Page of Winnipeg, Manitoba, said that her first snowmobile ride happened back in about 1975, when she doubled with her then-boyfriend, Russell, on his dad’s sled. A short time later, as a newlywed, Carol was ready to drive her own machine. Fast forward a few years and Carol and Russell were introducing their children to the world of sledding.

“Cassie came sledding with us when she was just two months old,” Carol said. “I’d put her in a Snugli and climb into one of Russel’s old suits that fit over the two of us. We’d drive very slowly and go for a ride to a warm-up shack by the lake.

“The kids always wanted to sled on their own, so we found a little Kitty Cat (snowmobile), and (when we thought they were capable) we would ride beside them on the lake in front of our cabin—it was a safe, open area where they could practice. We’d just give their ski a nudge with our foot to keep it going in the right direction.”

The three Page children are grown up now, with partners of their own, but they still love to meet their parents at the lake for a weekend of sledding.

The beauty of Whiteshell

That lake Carol mentioned is Nutimik Lake, one of more than 200 lakes in Whiteshell Provincial Park, about 90 minutes east of Winnipeg. Carol said that the trails at Whiteshell are spectacular and that the park continues to be the Page family’s favourite sledding playground.

“They cross lakes, wind through forests, climb over rock ridges—there’s lots of variety,” she said. “It’s only flat when you’re going across the lakes. It’s beautiful—we often see owls flying across the trails, and deer browsing among the trees.”

“A lot of families use the park,” said Russell. “There are lots of warm-up shelters stocked with firewood, and it’s not uncommon to be at a shelter and see 10 sleds pull up, carrying people of all ages. It’s fantastic. And there are four little townships bordering the park, where you’ll find gas stations and restaurants.”

Russell said that for his family, there was more to snowmobiling than simply fun. He volunteered for most of the board positions of the Whiteshell Snowmobile Club, and the children were often involved in the trail maintenance jobs—stacking firewood, cleaning trails and such. They helped whenever they could and understood that the privilege of enjoying the trail system came with a price.

“We have a lot of special memories, and I cherish them,” Russell said. “They make a bond for all of us. Our kids still come out to sled with us, and we can’t wait to get a grandkid so we can buy a small sled.”

“The kids have shared this activity all their lives,” Carol said. “It still keeps them close even though they don’t live near each other. Love of riding together keeps us close as a family.”

Name: Carol Page
Your current sled: A 2011 Ski-Doo GSX 600
Your favourite kind of riding: Trail riding with friends and family—I like the camaraderie.
What does sledding mean to you? Besides spending the time with friends, I like being out in the fresh air. Sledding gets me away from the couch and the fireplace.