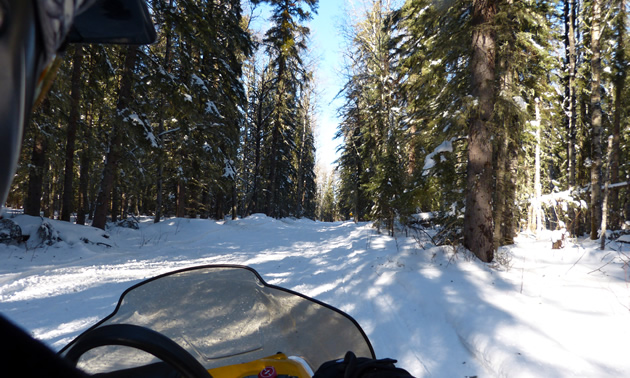 The Golden Triangle Trail takes riders through heavily wooded areas, across rolling hills and along rivers. As well, there are plenty of cutlines along the way where riders can find powder to play in. Kirsten Armleder photo

Long-distance rides are great, but they’re usually not something you can plan during the week and do on the weekend. Unless, it’s the Golden Triangle. This 350-kilometre trail in Central Alberta is a turnkey option for those who love putting on the miles, and it’s a circle loop, so there’s no need to retrace your tracks.

Groomed and signed, the Golden Triangle links Whitecourt, Swan Hills and Fox Creek. You can start riding from any of these towns and the entire length of the trail can be ridden in one, really long day. Most, however, choose to break it up into a two- or three-day ride.

The largest of the three towns, Whitecourt is truly snowmobiler friendly. Take for example, the World Snowmobile Invasion that took place there in February 2015. It was a million-dollar event that saw over 10,000 sledders from Canada, the U.S. and overseas in attendance.

Things will be a lot quieter in Whitecourt this winter, but the Whitecourt Trailblazers will be hosting the club’s annual family snowmobile rally in February and they have a concert planned for Saturday night.

Now, back to the Golden Triangle. From Whitecourt, the trails head north to Swan Hills. Along this 115-kilometre section, you will see poplar and spruce forests, rolling hills, lakes and rivers. The Athabasca Look-Out and the Carson Warm-Up Shelter are a couple of good stops along the way.

Getting there: The Golden Triangle starts at the Eagle River Staging Area, 10 minutes northwest of Whitecourt on Highway 32 towards Swan Hills.

Parking: The Eagle River Staging Area has ample parking, a loading ramp and a warm-up shelter.

The Whitecourt to Swan Hills leg of the Golden Triangle is the most scenic, but the Swan Hills to Fox Creek leg is the snowiest. Due to the high elevation of Swan Hills, this town and the surrounding area receive above-average snowfall.

If you’re tempted to spend some more time exploring this year, try the Krause Lake trail system; it is maintained by the Swan Hills Snow-Goers.

Getting there: Staging for the Golden Triangle and the Krause Lake trails begins on the south side of Highway 33 by the Tourist Booth.

The burgeoning town of Fox Creek is a great place to start your Golden Triangle ride. There are several newer accommodations in Fox Creek, and snowmobiling from your hotel is allowed. Members of the Northland Snow-Goers also currently maintain two cabins along the Golden Triangle, the Trappers Cabin and the Eagle Cabin, in addition to the club’s own trail system. This winter, though, there will a third cabin installed along the section of the Golden Triangle Trail that runs from Fox Creek to Swan Hills.

Getting there: The entrance to the Fox Creek snowmobile trails and the Golden Triangle starts on the north end of 1st Street at the 2nd Avenue intersection.

Parking: If you’re not riding from your hotel or motel, parking is available at the Fox Creek Community Hall or the Arena. 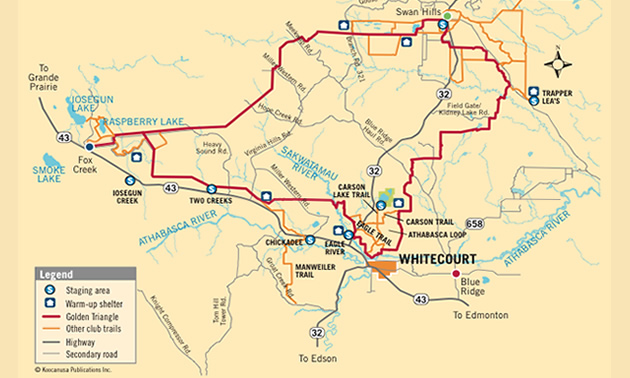