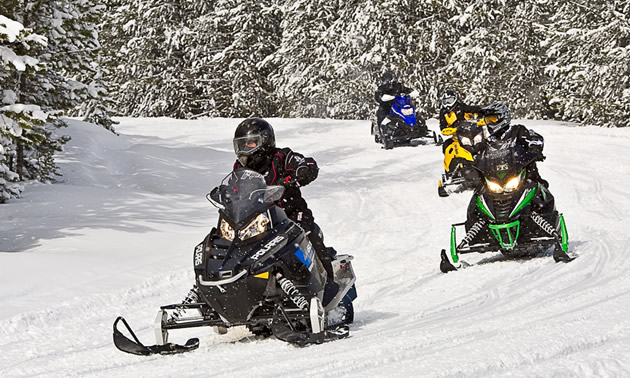 Many families have discovered that snowmobiling is a great winter recreational activity. Photo courtesy ISMA/Wade Davies

A long lasting cold and snowy winter in much of the snowmobile community, and continued enthusiasm and interest in snowmobiling powered snowmobile sales to increase worldwide to 133,081 new sleds sold this past year. This is an increase of over 8,275 units, which is a 7 percent gain from last year. Sales in the United States grew to 55,025 new snowmobiles sold – a 3.7 percent gain from last year, while sales in Canada fell 0.1 percent to 46,784 new snowmobiles sold. The sales increase wasn’t confined to North America. Sales increases were realized in Norway, Sweden, and Finland. Sales in Sweden increased 17 percent to 11,956 new snowmobiles sold and increases of 15 percent were reported in Norway and 26 percent increase in Finland. The largest national increase was in Russia where sales increased 88 percent over the previous year.

The snowmobile community is optimistic following the above average late snow fall throughout most of North America this past season. The 2019 manufacturers’ spring snowmobile shows reported increases in attendance. In many of the spring shows, attendance was up over 20 percent. Spring orders were strong and that points to a good 2020 sales year.

Snowmobile related tourism also increased in North America and beyond. This can be seen in economic impact studies conducted throughout North America by major business colleges and universities. Miles ridden by snowmobilers (which is always predictive of economic impact) showed an increase of over 15 percent this past season versus 2018 season. This is a result of riding conditions and improved and expanded riding areas and trail systems.

The average age of a snowmobiler this past season was determined to be 45 years of age. Snowmobilers are active, outdoor enthusiasts who enjoy snowmobiling with family and friends.

Surveys conducted by ISMA have shown that 75 percent of first-time buyers in the snowmobile market purchased a used snowmobile. Many of them are young adults and they move on to purchase a new snowmobile later in life.

The Go Snowmobiling website serves as another strong indicator for the interest in snowmobiling. This year, the Go Snowmobiling site received more than 2.34 million hits. 40 percent of those visitors to the website were new snowmobilers or individuals who do not own a snowmobile but are expressing a great deal of interest in owning a snowmobile and going snowmobiling. 20 percent of the visitors to the site visited the rental outlet pages of the site.  Indications are that many of the individuals visiting the rental site do not own a snowmobile but want to rent one during their winter vacation. This high level of interest in renting bodes well for future sales and the growth in the snowmobile rental market.

Many families have discovered that snowmobiling is a great winter recreational activity. Research shows people go snowmobiling for reasons such as viewing the scenery, be with family and friends, to get away from the usual demands of life and be close to nature.

Many organizations report that new trails are being developed to support the positive economic impact of snowmobiling and job growth for the rural community. Economic impact studies generated by universities in North America show that snowmobiling is growing in importance as part of the overall economic engine and job growth for winter tourism. Studies show that snowmobiling now generates more than $30 Billion Dollars of economic activity in North America. The economic activity generated by snowmobiling provides many jobs and investment opportunities and generates considerable tax revenue for local governments which eagerly support snowmobiling.

Snowmobiling is a most important segment of the Outdoor Recreation Economy which overall generates over $887 Billion of economic activity in the United States alone, as reported by the US Department of Commerce and the Outdoor Recreation Roundtable (ORR). Coalition members of the ORR generate over 7.6 million jobs. Snowmobiling is a vital component of the Rural America Development effort.