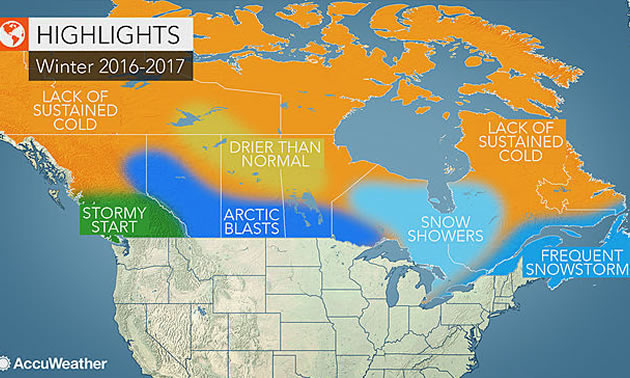 AccuWeather Global Weather Center - October 17, 2016  - AccuWeather reports a snowy season is in store for some of Canada's biggest cities as winter storms dump frequent snow on eastern Canada. Stormy weather is also in the forecast for British Columbia and the Canadian Rockies this winter, while the Prairies face bitter cold.

This winter is expected to play out much differently across eastern Canada than it did last year, when mild conditions and below-normal snowfall dominated.

"The upcoming winter will likely be a stormy one across eastern and Atlantic Canada, especially during January and February," AccuWeather Senior Meteorologist Brett Anderson said. "This pattern will lead to a higher probability of significant snowfall events from eastern Ontario through Quebec and into New Brunswick and Newfoundland," he said.

This includes some of Canada's largest cities such as Montreal, Ottawa and Quebec City. The forecast is good news for snowmobilers across the region that had a slow season last year due to mild weather and below-normal snowfall.

"I expect this upcoming (snowmobile) season to be significantly better than last winter's," Anderson said.

"Areas such as Nova Scotia and Prince Edward Island will see constant battles between snow, ice and rain," Anderson said.

Arctic intrusions to freeze the Prairies

The Canadian Prairies have already had a taste of winter with both chilly air and accumulating snow, but the worst of the season will hold off until the arrival of 2017. The start of the season will feature occasional intrusions of chilly air, but the overall pattern will favor windier and milder conditions in cities such as Calgary and Edmonton.

"A pattern change by midwinter will likely send waves of very cold Arctic air directed into the southern Prairies for January and February," Anderson said.

The onset of each wave of arctic air may bring some periods of snow, especially in southwestern Alberta, but this will be followed up by drier conditions once the frigid air takes hold.

"Despite the arctic fronts, a persistent northwesterly flow of air during the second half of winter will suppress moisture far to the south, leading to below-normal snowfall over the eastern Prairies," he said.

Skiers to benefit from stormy start to winter in British Columbia, Canadian Rockies

A stormy pattern typical of winter will set up over British Columbia and the Canadian Rockies, delivering rounds of rain and mountain snow across the region.

"Heavy snow will quickly pile up in the mountains, which should get the western ski season off to a good start," Anderson said.

This will allow snowmobile destinations in British Columbia and Alberta to establish a solid base early in the season that will last through the spring. While winter may start off wet and snowy across the region, a change in the weather pattern will cause the frequency of storms to decrease heading into February and March. This flip in the weather pattern will also bring the potential for some brief shots of arctic air all the way down to the lower mainland of British Columbia, according to Anderson. These intrusions of arctic air may even reach areas closer to the coast, possibly making it all the way to Vancouver.

Meanwhile, the overall weather pattern this winter will favor warmer-than-normal conditions across far northern Canada, including Nunavut, the Yukon Territory and the Northwest Territories.