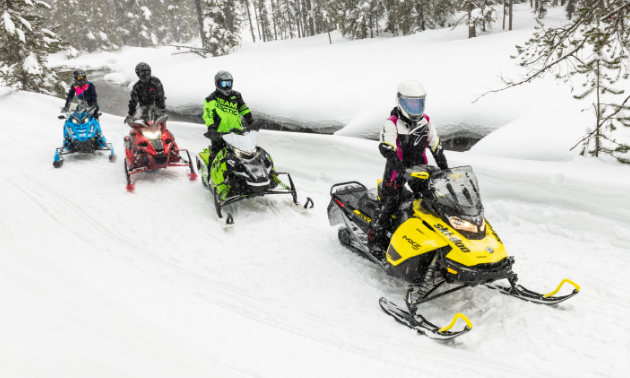 A strong economy during the autumn and winter of 2019-2020, along with excellent snow conditions in many parts of North America, helped support the snowmobile community, manufacturers and dealers. Continued interest and enthusiasm in snowmobiling this winter helped sales to remain steady at 123,862 new sleds sold worldwide, a 7 per cent decline from the previous year, which was a strong sales year supported by a long winter season. Sales in all three major markets, (United States, Canada and Scandinavia) reported minor declines influenced by a shortened sales season and the onslaught of the Covid-19 Pandemic. Sales in the United States were 51,036 new snowmobiles sold, while sales in Canada were 43,535 new snowmobiles sold.

Sales showed a slight increase in Finland to slightly over 5,040 units sold compared to 4581 units last year. Russia continues its strong sales activity with over 7,191 new sleds sold following last year’s sales of 6441 sleds.  This is a sales increase of slightly over 10 per cent in Russia, which highlights the improved economic health in Russia, joined with excellent snow conditions and enthusiasm for the sport of snowmobiling.

The snowmobile community is optimistic and already looking forward to a great 2020-2021 riding season since the end of this riding season in March-April 2020 featured tremendous snowfalls in much of North America.

The snowmobile industry reports that there are 1.1 million registered snowmobiles in the United States and over 543,000 in Canada.  The registration numbers continue to be steady, showing that snowmobiling continues to be an active, healthy winter sport.

Recently conducted surveys show that 82 per cent of the snowmobiling households own two snowmobiles that they register and ride. Increased registration in Northern Europe continues and there are well over 300,000 active snowmobilers in Scandinavia.

Snowmobilers are outdoor enthusiasts and over 50 per cent participate in activities such as boating, camping, fishing, ATVing and Motorcycle riding. Snowmobilers are active hikers, bikers and hunters. Over 60 per cent of snowmobilers in North America are club and/or snowmobile association/federation members. These active, outdoor enthusiasts build the trails and support snowmobiling access across North America. They are also active in raising money for charity and annually raise over three million dollars for national charities.

Families enjoy snowmobiling because it is a great outdoor recreation activity.  People go snowmobiling for the following reasons:

In many parts of North America and Northern Europe, snowmobilers are the economic engine for winter tourism. Snowmobiling is a vital component of the rural America development effort and is recognized as such by land managers around the globe. Snowmobilers are an optimistic group of people and they are looking forward to a great winter in 2021.