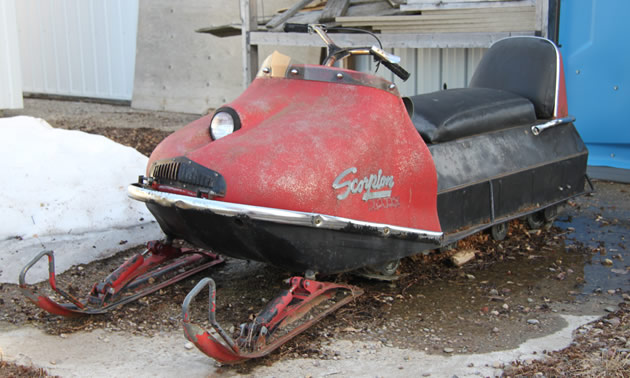 The Trail-A-Sled corporation of Crosby, Minnesota was one of the industry's pioneering snowmobile companies.  I recently came across a vintage Scorpion Trail-A-Sled snowmobile languishing in a backyard in southern Alberta — a small bank of snow still clinging to the shadows of winter. Though a little rusty, it looked like someone could jump on this Scorpion and ride off down the trail.

The Trail-A-Sled marketing slogan was “The only way to LIVE in winter!”  A brochure of the era read, “Scorpion, the quality machine with advanced engineering features…for unparalleled durability, reliability and performance."

Compliments of a Trail-A-Sled enthusiast website (http://www.trailasled.com) here is an early timeline of the Scorpion snowmobile:

1959 - In April, Trail-A-Sled, Inc (TAS) is founded in the central Minnesota community of Crosby-Ironton and begins full-time operations in a small garage in the city's Lakeview district. The firm consists of three founders and one employee. Work is immediately begun on a large air-sled and other fiberglass-based products.

1960 - The firm grows to three employees and continues work on a range of fiberglass-based products.

1961 - The TAS air-sled wins a major design award. TAS pontoon boats are met with rave reviews and earn a reputation for stability, quality and innovation. Inspired in part by the Bombardier Ski Doo, TAS begins to experiment with tracked snow machines. The air-sled is featured at Dayton's Southdale location in Edina, Minn. and retails for $2,570.

1962 - On Friday, February 9th the Crosby-manufactured Trail-A-Sled made an appearance on the national TV show, "Today." The Trail-A-Sled was featured in a story on winter fishing on Mille Lacs Lake.

1963 - Concentrating entirely on the production of Scorpion snowmobiles, the firm begins experimenting with a vulcanization process in an attempt to eliminate the cumbersome cleated track system.

On Wednesday, April 3rd the Crosby-Ironton Courier ran the following line, "Another creation by Trail-A-Sled made its appearance in the recent heavy snows. It is powered by a six horsepower air-cooled motor and goes a top speed of 20 miles per hour. It is driven by a steel-cleated track and steered by two front skis." Interestingly, the term "snowmobile" is not yet used in the media. In fact, people don't seem to know what to call it!

1965 - As the firm's rubber-tracked machines take hold, the company expands to 53 employees and produces up to 20 units per day. The company is awarded a major contract with Sears Roebuck and hits an annual payroll of $200,000.

1966 - The firm continues to grow and leases the city-owned Arena facility as well as several other area buildings. Employment tops-out at 125 persons and production peaks at 50 units per day.

1967 - The firm's Rubber Drives, Inc. division was in full force, able to produce six tracks per hour, as well as numerous additional rubber-based parts - many of which are sold to other manufacturers. The firm also operates separate fiberglass fabrication, welding and assembly facilities. A TAS plant manager Cliff Kittelson sets a world distance jumping record. David "Pappy" Burns begins his historic Alaskan Epic. In February, United States Vice President Hubert H. Humphrey declares Minnesota's Central Lakes to be the "Official Snowmobile Capital of the World." Production peaks at 85 units per day with 153 employees and a $1 million payroll. Inland Steel Company, among the area's largest employers, ceases underground mining operations in June, idling much of the Cuyuna Range workforce. A devastating fire in November cripples Trail-A-Sled, Inc. and the community at large. Company administrative records are completely destroyed by the blaze. In a miraculous turn-around, the firm slowly rebuilds for the future and breaks ground for a new facility. The Trail-A-Sail marketing campaign is announced.

This is just part of the Trail-A-Sled story, see the above mentioned website for the full story. Talking about stories, do you have a vintage snowmobile story or photos? Share them with us: [email protected]