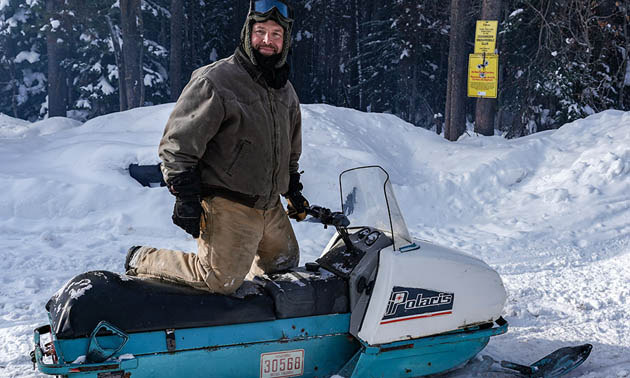 On a cold winter's day somewhere in the deep woods of British Columbia a snowmobile club met to hold their annual tribute to all things vintage — that is — all things vintage snowmobile. Sled stories were swapped, throttles were cranked, old tracks spun, aging iron creaked, gas and oil fumes wafted in the air and every time an old sled was fired up it brought a smile to the face of all in attendance.

We are talking about the Lumberton, B.C. Vintage Rally and Poker Run held back in February.  We have been featuring a number of the member's old sleds from the Cranbrook Snowmobile Club and vintage division. This week it's time to unwrap a vintage Polaris.

Known as the Textron years at Polaris, the manufacturing conglomerate Textron (makers of everything from Cessna airplanes to fighter jets) purchased the Roseau, Minnesota-based company in 1968 and sold it back to the company’s management group in 1980.  It was a time of change and rationalization throughout the entire snowmobile industry. (Note: In recent years Textron has returned to the snowmobile business with the purchase of Arctic Cat)

According to an article in American Snowmobiler, “….(when) the 1970s hit, big changes were already in the works. Sleds were starting to become more sophisticated. Gone were the water pump motors, old lawn mower engines and such. Manufacturers' factories were starting to produce special-built snowmobile engines Mercury and OMC were among the first to develop their own sled-specific engines.”

The article added, “"By the end of the '70s the sleds started to become more trail oriented. They got heavier and speedier and just weren't as explorer friendly as before. They ended up with bigger suspensions and 40 to 60 horsepower engines and weighed in the 360 lb. range, so they didn't scoot across the snow quite the same. Plus they had more and better features, like hydraulic disc brakes."

Talking about Polaris’ legacy of performance sleds here’s what SnowTech magazine stated about Polaris machines: “The TX 500 was in production until 1975 when Polaris introduced the redesigned 1976 TX free-air models (250, 340, 440) based on the successful Starfire race sled chassis. It would be three years (1979) before the first triple liquid appeared. The new 500 Fuji (Superstar) motor was the forerunner of the 600 and 650 Indy triples that propelled Polaris to become the market leader during the late 80’s and 90’s.”

Great to see a vintage Polaris sled on the snow at the annual Lumberton Vintage Rally and Poker Run near Cranbrook, B.C.

Do you have a vintage snowmobile story or photos? Share them with us at [email protected]