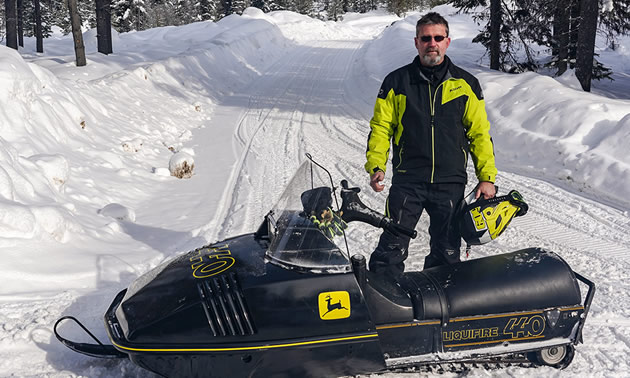 According to Wikipedia, “The slogan "Nothing Runs Like a Deere", still used today by Deere & Co., started with the John Deere snowmobile line in 1972. From 1978 to 1980, JD used the slogan "Big John - Little John." In 1980, another new slogan was introduced: "Ride the new breed of Deere".

In 1980, John Deere was the official supplier of snowmobiles for the Winter Olympic Games in Lake Placid, New York."

Snowmobile.com states, “By the time John Deere’s Horicon Works in Wisconsin figured out how to really build a successful snowmobile it was too late. Those final early-1980s Deere performance sleds proved unique. The Liquifire 440 could competitively accelerate to the eighth-mile nearly as quickly as the top-of-line Ski-Doo Blizzard 9500 and Polaris Indy 600. It handled as well or better than comparable performance sleds of its time and it could squeeze up to 25 miles out of a gallon of gasoline. It wouldn’t be enough.”

“Deere developed a suspension that became a signature selling point. Being light, nimble, fuel efficient and stylish worked for the Liquifire and other Deere sleds of the 1980s,” the website observed.

Despite a relatively brief appearance on the very competitive snowmobile scene back in late 1970's and early 1980's, John Deere machines ceased to be built in the mid-1980’s. The distinctive green, black and yellow striped sleds remain one of the hottest collector items on the vintage snowmobile circuit these days — and when you see an eye-catching unit like this one you can see why.

Thanks once again to Doug Williamson for capturing this great photo and thanks as well to Wade Boardman for sharing his John Deere Liquifire 440.

Got a vintage snowmobile story or photo? Share them with us [email protected]