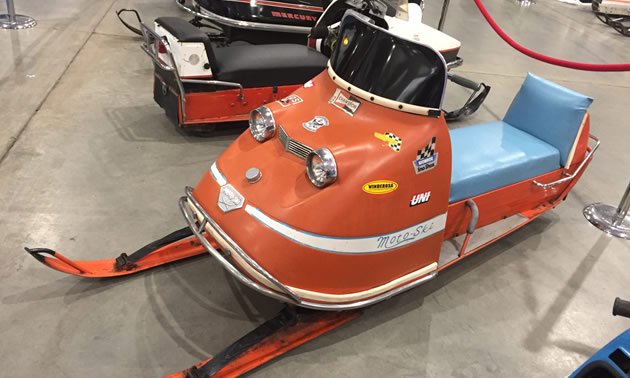 Here's a nice-looking vintage Moto-Ski that caught our eye at the Saskatchewan Snowmobile Show last fall. These old bright orange machines, with their distinctive dual headlights, are still real head turners and are always popular on the vintage sled show circuit.

As we have written before, Moto-Ski snowmobiles had a colourful and interesting heritage in the snowmobile industry.

A vintage snowmobile page devoted to Moto-Skis states that these little orange wonders were first built in LaPocatière, Québec by Jean Yves Bélanger and Raoul Pelletier in 1963. It was not their first sled endeavour as they had built a "snow contraption" called "Le Cupidon" or "The Cupid" some years before. "Le Cupidon" was green with a big windshield and a cleated track, not the trademark orange of the Moto-Ski line-up.

Legend says the "Cupid" venture was financed by a Mr. C.E. Bouchard (Industries Bouchard) for whom Mr. Pelletier was a salesman. Mr. Bélanger was the machinist-mechanic behind the venture. Believe it or not, Mr. Bouchard owned a pharmaceutical manufacturing business (aspirin & cosmetics). Being an adventurous type of fellow, Mr. Bouchard fell in love with the "The Cupid" project and then, possibly because the cash ran out, he fell out of love with the project which prompted his employees Belanger and Pelletier to start their own sled manufacturing company - the result was Moto-Ski.

Interestingly, the Moto-Ski name was the result of a contest at a local school with one of the students naming the little orange machines Moto-Ski. The rest is history, with the famous machines eventually being sold to Bombardier's Ski-Doo division. They were eventually phased out and discontinued.

Do you have an old sled story or photos? Share them with us at [email protected].