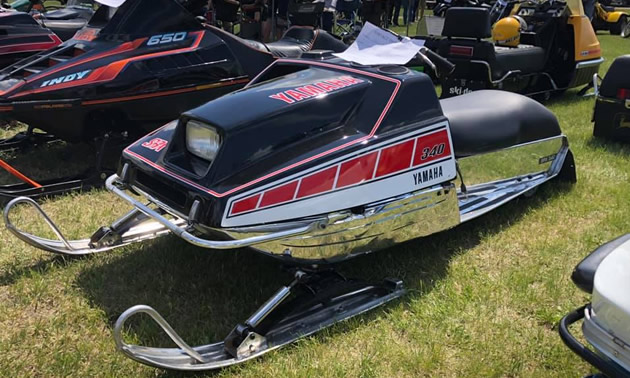 Here’s a show stopper! A fully restored, original 1970’s Yamaha 340 SRX — look at all that shiny chrome. This week’s Old Sled comes from a recent post by Edson, Alberta's Calvin Robinson, on the enthusiast website Alberta Relic Riders (ARR). We wrote about Calvin's sled earlier this year and it continues to impress.

And as one commenter of the ARR website stated, “That tunnel looks amazing, Calvin!”

It's a 1976 Yamaha 340 SRX – and here’s what Yamaha says about that model year: “The first Yamaha production sled with liquid-cooling. This high performance model's innovative radiator / heat exchanger cooling system introduced new technology to the sport, but it was the sled's winning ways on the racetrack that made it a legend. The liquid-cooled SRX340 was also introduced this same year.”

Another vintage snowmobile site stated this about the SRX’s, “While Yamaha won at Eagle River, it also won over consumers, who began taking a more serious look at Yamaha sleds. That Eagle River winning sled didn’t translate directly to a new 1972 trail model, but it did set the stage for the SRX series, a model name that has come and gone over the decades.

The Yamaha SRX with the 440cc twin has become one of the most sought-after collector sleds in the sport. A 1977 SRX in excellent condition sold for US$5000 last December. Whether or not you have an SRX or want one, know that the SRX in its heyday underscored the concept of power-to-weight. According to the legend, the 1971 Eagle River winning Yamaha was said to nearly match the Ski-Doo Blizzard in that area.”

Great looking sled, Calvin. Hang onto that shiny penny of a sled – it's a show stopper for sure!

Got a vintage, classic, antique story or photo of an old snowmobile? Share it with us: [email protected]