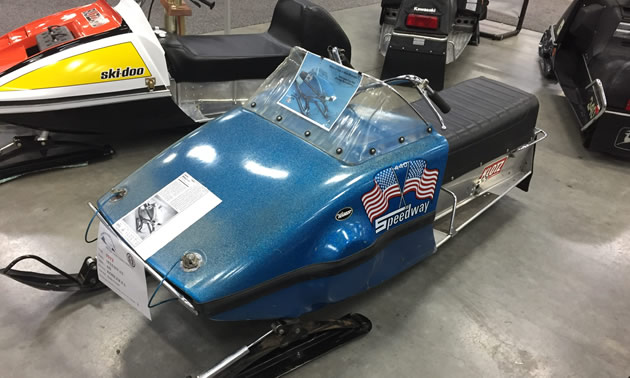 “Think of it as a blue Ferrari” was the Speedway snowmobile’s claim to fame and, of course, their advertising slogan.

This is the first time we have encountered a Speedway sled and have had the opportunity to feature it in our Old Sled Zone Column. We spotted this one on display at last fall's Edmonton Snowmobile Show.

This metallic blue, high-performance machine certainly has the low profile and power to roar like a Ferrari. It is a 1972 Speedway 440 Kohler FA and is owned by Alberta Relic Riders’ member Kelly Grant.

Evidently Speedway Products, Inc. of Mansfield, Ohio produced the Speedway snowmobile from 1972 through 1974. The machines were designed and marketed by ex-Rupp employees as high performance snowmobiles, according to a blurb from the Top of the Lake Snowmobile Museum.

In 1973-74 approximately 1,000 Speedways were produced. In April 1974 the entire business was sold to Fox Corporation of Janesville, WI and the operation was moved to Janesville.

Here’s what one vintage snowmobile enthusiast said about the Speedway: “You will see Speedways at vintage shows today...or maybe at a vintage drag. I remember them in the early 70's...most often with Kohler Free Air engines with the Star-Burst Heads. This was pre-Twister and they had an unbelievable power to weight ratio. The problem with them was fouling out at the line. More often than not, if they fouled out, the driver could not get it restarted in time. Some of them had a pulley on the Mag side and they actually used a chain saw to start them with (tightened a belt into the pulley to spin the engine). Never will get the smell of a Speedway burning Klotz out of my head.”

You have to be impressed with the “blue Ferrari” of snowmobiles. Congratulations to Kelly Grant for showing off this great looking model.