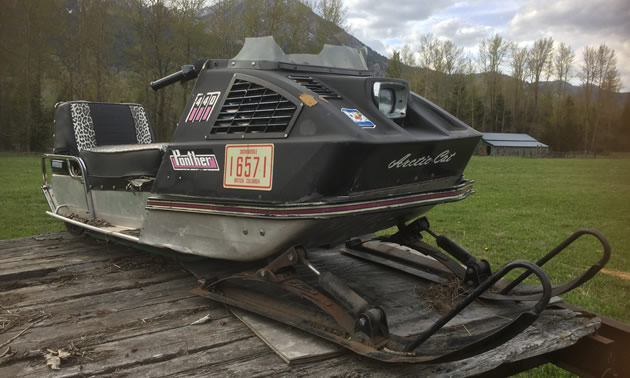 This vintage wildcat, an Arctic Cat Panther 440, was found on display in a local farmer's field - part of an estate sale. Photo courtesy Keith Powell

Outstanding in its field, literally! That’s where I found this 1972 Arctic Cat Panther 440 recently. It was on display, literally sitting in a farmer’s field, in what appeared to be an “estate” sale — the sale featured this machine and another old Johnson snowmobile which we wrote about last week in Old Sled Zone.

The snowmobile trade press sang the praises of the 1972 Arctic Cat Panther 440 back in the day.

“As usual, Arctic will give you the best ride in the business,” Snow Goer reviewers stated. “In our estimation, their suspension system hasn’t been matched by anyone yet. The console is slick, the (partial snow-leopard print) seat is striking and comfortable, and good design is apparent in most features.”

1972 was the apex year for snowmobile manufacturers as they produced an industry record 1 million plus snowmobiles for the season – Thief River Falls’ Arctic Cat lead the industry in producing over 100,000 machines that season.

Snow Goer called 1972 a benchmark year in the history of snowmobile manufacturing. Though, at the time no one realized the energy crisis years of 1973 to 1975 were just around the corner — which would prove devastating for the snowmobile industry.

According to an  Arctic Cat brochure from 1972 here were some of the selling points for the eye-catching, powerful machine:

Panther – The main reason people trade up to Arctic Cat.

“After you’ve been around snowmobiles for awhile, you recognize the value of a lightweight aluminum chassis, a torsion spring/slide rail suspension system, and a balanced chassis layout. You learn about traction, stability, ride and floatation. And you find out which machine has it all. The Boss. Panther has been setting standards for comfort, control and durability for some time now and 1972 is no exception. You can count on it.”

For all the performance features of the Panther 440, the crowning touch has to be the leopard print stripes on the seat – that truly says, “King of the snowmobile jungle.”

I hope somebody scoops up this Arctic Cat Panther 440 I found sitting in a farmer's field – it’s a classic machine with a lot of industry legacy behind it.

Do you have fond Arctic Cat Panther memories? Share your vintage sled photos and stories with us. Email us [email protected]