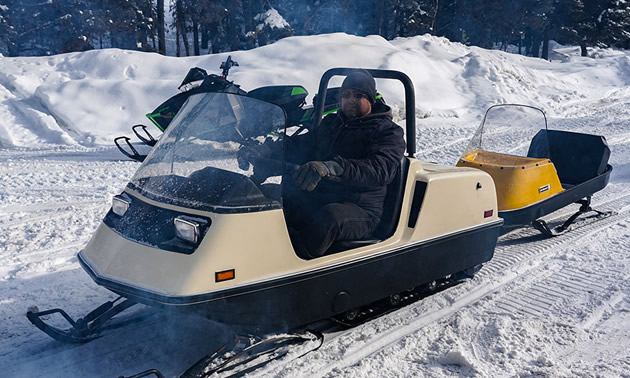 A Ski-Doo Elite, towing a cutter behind it. Photo courtesy Doug Williamson

We dig back into our vaults and pull out another picture from the Cranbrook Vintage Ride and Poker Run held back in February of this year. And what did we pull out you ask?

How about a Ski-Doo Elite with a fine little Ski-Doo cutter trailing behind? I am pretty sure we have written about this model before — however, here’s a recap:

“Ski-Doo originally introduced the two-seater Elite model way back in 1973. The marketing vision was that the Elite would, in fact, appeal to the “elite,” or a more well-heeled, upscale snow riding clientele.

The heavy sled was designed to give a smooth ride while offering “nimble” handling despite its clumsy twin tracks and wide twin-ski stance. This Elite model sported a rear-mounted 635cc fan-cooled twin engine.

It came with side-by-side seating that mimicked the “pony” cars of the day, complete with a 4-speed console mounted shift transmission lever located between the seats.

By the 1975 model the Elite's engine had been scaled back to a 436cc Rotax twin but the amenities upgraded to include a speedometer, tach, electric fuel gauge and, to appeal to the more urbane of the day, a cigarette lighter.”

Back then, the late 1970’s and early 1980’s, Ski-Doo was playing to the “creature comforts” of snowmobilers rather than just the pure performance aspect of the sport.

Evidently some of the factory or dealer upgrades also included a CB radio, (straight out of Smokey and the Bandit), a ski rack and AM/FM radio. The cockpit was said to channel an airline cockpit rather than an open air snowmobile.

Ski-Doo's foray in the two-seater, side-by-side snowmobile (a movement that has taken the ATV world by storm) ran from 1973 to 1976, and was brought back in 1978 until 1983 and then mothballed again, only to be resurrected in a sporty new iteration in 2005.

Is 2020 the time for another Ski-Doo Elite resurgence?

It’s always nice to see a Ski-Doo Elite plying the trails and bringing back memories of yesteryear. And we are waiting to see if 2020 sees the return of another side-by-side snowmobile – Elite 2.0.