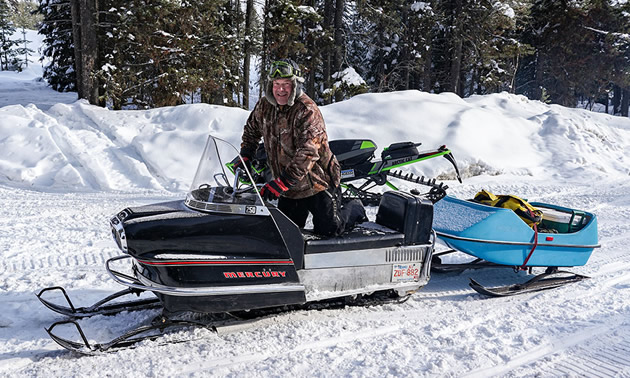 Here's another showstopper from the Lumberton vintage rally back in February — a 1970 Mercury 250 on the trail complete with accompanying Snoboggan trailing behind.

According to one vintage website called Barnfinds the Mercury snowmobile was somewhat of a classic, “The 1960s and 1970s were the era of cool, fun, unusual snowmobile designs when companies were trying anything to grab some market share." (Including, of course, the famed maker of Mercury outboard boat motors.)

This unusual Mercury 250 design would give way a handful of years later to the Mercury Twister. These are such unusual snowmobiles — just unusual in looks, at least from the front. That close-set twin-headlight cowl is so 'jet age' — a snowmobile for the Jetsons?

Mercury snowmobiles were the brainchild of Carl Kiekhaefer, maker of the famous Mercury outboard motors. By the late-1960s, there were dozens of snowmobile manufacturers.

“The 250ER was the top of the line for Kiekhaefer Mercury at this time. For the record, the E was for electric start and R was for reverse. Fancy for 1970, although some snowmobiles had both of those features several years prior to the 250. Powering the 250 was a 436 cc twin-cylinder with 25 hp, thus the 250 name.”

Its heritage may have been an outboard boat motor company, but the Mercury snowmobiles were trendsetters in their day – and continue to be popular with vintage sled collectors. A tip of the hat (toque) to this collector as he proudly shows off his great looking Merc.

The "jet age" Mercury 250 snowmobile — a snowmobile made just for George Jetson. Do you have a vintage snowmobile story to share? Email us at [email protected].com