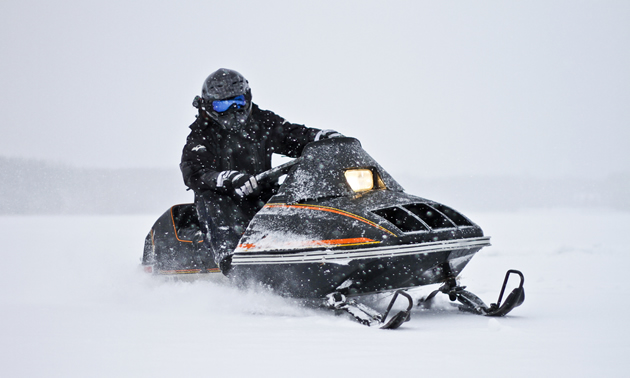 Doesn’t this remind you of a sled advertisement from “way back when”? That is, of course, without the rider and his 509 Aviator goggles and HMK riding gear! Steve Dutcheshen Photography Inc.

Remember Arctic Cat’s Pantera? If not, maybe the above images will jog your memory. These photos were sent in by professional photographer Steve Dutcheshen of Calgary, Alberta.

Dutcheshen, who is originally from Kamsack, Saskatchewan, captured this old sled in action shortly after its new owner, Derek Dubasoff of Medicine Hat, Alberta, decided to take his $500 investment for a test run at Green Lake, Saskatchewan.

Like old sleds do, the 1970s-era Pantera quickly caught the attention of passersby.

“There must have been 30 people that came out from the warm-up shack (to see it),” said Dutcheshen. “There were more people standing around talking about that sled than they were about the brand new sleds.”

The Pantera has a bit of a storied history. The name was introduced in 1975, but a year later, the Pantera was redesigned from the ground up and rereleased. The 1976 model sported an all-aluminum chassis instead of a steel front end and parallel-rail slide suspension. It came with new arched skis, and the free-air Suzuki Spirit engine that powered it was suspended on the frame rather than bolted on. Yes, it was a revolution, and one could say that the Pantera paved the way for the machines we see today.

Dubbed by Arctic Cat as the "Catillac" of snowmobiles, the 1976 Pantera was a performance sled with some comfort and long-distance riding features. Over the years, it morphed into a two-up touring sled and eventually went out of production. These days, Cat seems to be interested in preserving its legacy by bringing back names like El Tigre and ZR. We have yet to see the Pantera name pop back up into the lineup, but we’ll watch for it.

Thanks to guys like Dubasoff and Dutcheshen, we still get to reminisce about the past every now and then and remember what our sleds used to look like.