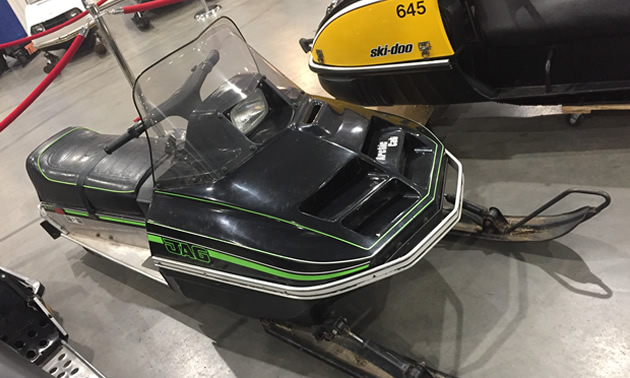 At last fall’s snowmobile show in Saskatchewan there was, as always, a great display of eye catching vintage snowmobiles. You know — those old machines that still tug at your snow riding heartstrings.

One of the sleds on display was a 1981 Arctic Cat Jag (Jaguar) – restored to shiny, almost showroom condition and definitely an eye catcher.

Arctic Cat first introduced the popular Jag model back in 1976. The company billed the machine as an inexpensive, peppy, lightweight, fuel-efficient and rock-solid reliable sled.

So writes Marc Roden in a series called My First Sled. He also writes extensively about the 1979 Jag line-up. He states, “In other words, the Arctic Cat Jag was the ideal first sled. Situated between the entry-level Lynx and the Trail Cat in Cat’s 1979 line-up, the Jag resonated with families as it struck a great balance between practicality and performance.”

Where was Arctic Cat positioning these new Jags in the snowmobile marketplace? He writes, “Unlike many family snowmobiles from that era, the Jag had racy good looks handed down from its big brother, the El Tigre. As your dad or big brother weren’t embarrassed to be seen on a Jag, you may have seen less of this sled than you would have liked.”

Marc Roden adds, “For the 1979 season, Arctic Cat upgraded the ride performance of the Jag by changing the rear suspension slide rails from steel to extruded aluminum. In the process, they also boosted the rear travel from 2.75” to 4”. Cat also changed the Mikuni carburetor from a slide-type to a butterfly-type that was less prone to freeze-up. That year was also the first time that Cat offered three engine options in the Jag. Available options included an air-cooled 275cc model (known as the “Jag 2000”), as well as an air-cooled 340 and a fan-cooled 340. The fan-cooled 340cc model also offered the convenience of oil-injection. These Suzuki-made engines were renowned for their reliability and capacity to withstand tremendous abuse. For this reason, Arctic Cat has been using Suzuki engines for almost 40 years and still do to this day.”

He sums it up, “The Jag was truly a snappy all-round performer. The 340cc engine laid down 30 horsepower and could reach a top-speed of about 60 miles-per-hour. The upgraded suspension, light weight, track cleats and forgiving chassis geometry would allow a skilled rider to humble much more powerful sleds on tight trails. To keep the price tag low, the 1979 Jag came as a very basic package. Arctic Cat did offer an assortment of options including a speedometer, tachometer, temperature gauge, electric start, tow hitch and a safari rack. This generation of the Jag came to an end when Arctic Cat declared bankruptcy in 1982. Arctic Cat made a comeback in the mid-80s and the Jag name was also revived as a 440cc model. But the Jag of the late-1970’s will always be remembered as a classic economy sled that delivered fun well-beyond its price tag.”

The late 1970, early 1980's Arctic Cat Jags may have been known as modest sleds, but they were considered by many to be a truly "sweet" ride at the time.

Do you have an antique, vintage or classic snowmobile story or photo? Share it with us [email protected]