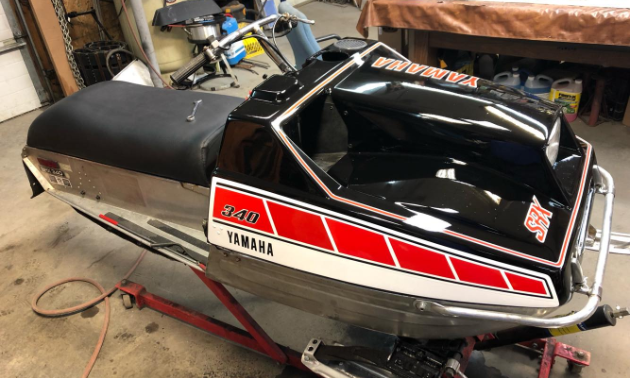 Coming in at number 3 this week with 1247 likes is the story of Calvin Robinson and his sweet ride - Old Sled Zone: 1976 Yamaha SRX 340 factory race sled.

We haven’t heard from Calvin Robinson, our friend in vintage snowmobiling for a while, so we were pleased have him pop up in our contacts last week.

Calvin sent us some photos of his sweet-looking 1976 Yamaha SRX 340 factory race sled – number 75 in the production run.

Here’s an interesting bit of trivia. How do you tell if it’s a Canadian or USA model? Calvin fills us in, he said, “They call this a Canadian edition because of the black hood the USA version’s hood is white.”

According to our friends over at SnoGoer, “The first Yamaha to carry the SRX model designation was the company’s 1974 Sno Pro racer, with a very few units handcrafted for the fledgling professional racing circuit. They weren’t big winners or the most publicized Sno Pro sleds and most snowmobilers never even saw one.

The SRX designation was not used in 1975. It returned in 1976 and ’77 for Yamaha’s race-ready oval sprint sleds that were offered in limited numbers to qualified independents for the “Stock” class competition of the day. Built to go fast and turn left until there was no more hundred-plus octane aviation gas remaining in the tiny 2.6-gallon fuel tank, the sleds had aluminum skis, a tachometer (a speedometer was optional), no windshield and only a pretense of trailability.”

“The SRX was from the beginning meant for racing and competitions, but after a few years it became a product for regular riders. The SRX was Yamaha’s first L/C snowmobile. (Liquid-cooled)

Yamaha SRX years: In 1974 Yamaha factory-raced with a few SRX 440 Sno-Pro models. This sled was equipped with a Water-cooled 2 cyl. 440 engine. Every single one of these sleds were unique and had different specs. I have been told that there was only 6 of them made.

“In 1975 – they made a limited model that fit all the GPX parts but was much lighter and looked better – the chassis was very thin aluminum. It was most likely the same engine as the 73 model.

The 440 was about 100 HP very narrow power band. We never had it on the dyno but the late Bud Lees Koehler’s were dyno-ed at over a 100 HP by the factory in Toronto. We had slightly better speed.  The 340 would almost do 100 mph as well on an ice ½ mile.  So it was pumping out some HP.  The rpm band was about 3 so it was tricky to clutch. This sled was called the SRX. The same sled was built in 76 (to look like the stock sled) – but the engine used the standard barrels – factory built.

In 1976 introduced Yamaha the SRX model, a 340 and the legendary 440 with 439 cc RT engine. This was the first model for Yamaha with Liquid cooled engine. In competitions it became a big winner. None of the SRX was sold for normal use, this was a race-sled and it was not usable to anything else.”

As you can see the Yamaha SRX had a very rich racing legacy. Thanks again to Calvin Robinson for sharing photos of his super-clean looking Yamaha SRX. Great to hear from you again, Calvin.