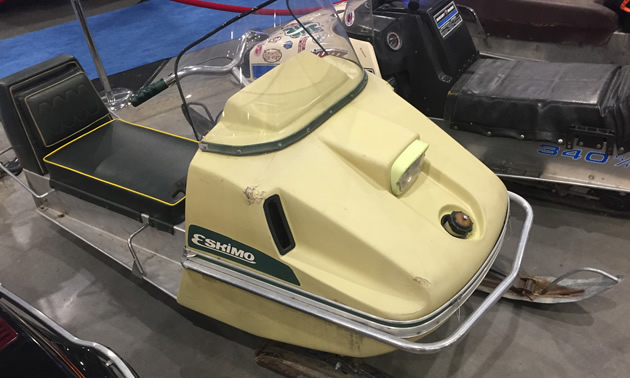 The Eskimo was produced for a short time in Quebec. Photo courtesy Jason Wood

Here’s another classic from the recent Saskatchewan Snowmobile Show – a 1975 Eskimo snowmobile.

He states on David’s Vintage Snowmobile page, “My father was in the snowmobile business in upstate New York between 1963 and 1973. He started out as a Moto ski and AMF Ski Daddler dealer in 1964. He handled Moto Ski until 1969 when he became a distributor for Snow King (what a piece of junk). Late in the season of 1969 we saw an ad for a machine called the Eskimo. We contacted the manufacturer in Canada and they promptly brought two machines to my father’s business.  They were a lime green and made from aircraft aluminum, very light. One was powered by a 20 hp sachs and the other 25hp. The interesting thing was in regard to the 25 hp machine, deep snow could not stop it. I witnessed it cutting through 3 ft of the soft stuff passing a light footed Ski-Doo and MS 18 Moto-Ski on a grade.  My father made arrangements to become the distributor for this sled, but the company had internal disputes and our contact left the company to start a new snowmobile business.  The sled was called a Norway and the initial prototype was a putrid maroon and purple color. My father said it would never sell based on the color. They changed the color to lime green slightly different from the Eskimo in order to avoid any legal issues as Eskimo was in full production. The name was changed from Norway to Northway.”

I personally have to say, I love the Eskimo snowmobile logo — it's a true classic!

According the destination website for the Chaudiere-Appalaches region in Quebec: The area has a long legacy in snowmobile manufacturers. They state: Since the invention of the snowmobile, the Chaudiere-Appalaches in the Province of Quebec has been known as one of the best snowmobiling destinations. Between the 50's and the 80's, 15 snowmobile manufacturers were functioning in the region, such as:

I can only imagine the fun early snowmobilers had putting around on one of these classic Eskimo snowmobiles.