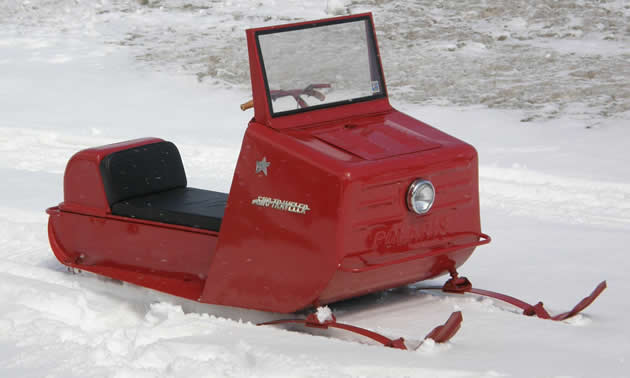 A 1964 Polaris Comet LA-600 with six horsepower Lauson engine. It is believed that only about 400 were built, and many were recalled to the factory and destroyed due to poor design choices in the track, clutch and undersized engine. Photo courtesy ACSCC.

Vintage, classic and antique snowmobiles have a following around the world. Many people own and collect these kinds of sleds, especially right here in Canada.

"Essentially there were a bunch of guys from Ontario collecting old sleds," said Long. "The ASCOA is a great group of people, but they didn't take into consideration vintage sleds, which would be 1968 or older. The guys organizing the Canadian club wanted to show off their vintage sleds, which were considered antique by American standards and race sleds, none of which the American club sanctioned, for lack of a better word."

"It is a great club," said Long. "We are really trying to preserve the history of snowmobiling while having fun at the same time. We like to get together and search out old stock parts so we don't lose this history to the dump. And we really want to focus on education."

There is a vintage snowmobile show almost every weekend somewhere in Canada. ACSCC members also attend swap meets where they show their sleds, bring used parts and swap or sell these parts. Vintage racing is also a big deal.

"In Ontario, we are very fortunate that Rob Noakes puts on the Grand Prix de Kincardine. It is a unique form of snowmobile racing. The race is done on a packed and groomed snow track in and around Kincardine, Ontario. The rules and classes are very simple and it's basically keeping the fun factor at a low price. We are very fortunate to have Rob putting on these races: drag races, closed course and cross country."

The club has members throughout Canada and the U.S. and even in Sweden. But because of the economy, Long said some enthusiasts are forced to sell their antique or classic snowmobile to pay the mortgage. Long would like to make the club historian job more than what it's been in the past.

"We are trying to do some investigation into old dealers that have gone under and closed their doors by using social media," said Long. "Most dealers when they sell sleds put a sticker on the sled and I'm currently asking people from all over the world to send me them. I put them up online and see if anyone has any information. I have been asked and I will accept if and when it comes about to head up the Snowmobile Historical Society of Canada. We won't be collecting sleds; instead, we want to collect paperwork, brochures, literature, videos and so on to try and preserve the amazing history of snowmobiling, especially in Canada."

When asked, it was hard for Long to pick his favourites.

"There are a number of iconic sleds out there," he said. "The original Ski-Doo, the 1959/60 Bombardier Ski-Doo, was considered iconic and was the start of recreational snowmobiling as we know it today. When you get into the mid-1970s, there was a number of manufacturers who brought in independent suspension, so sleds like the Polaris RXL and the Yamaha VMax are also very iconic. I don't like to pick brands—there's so many great sleds out there."

Long  has been in the game for a long time and has gone from owning over 300 classic or antique sleds down to about 13 or 14.

"It's a sickness," Long said. "My greatest fear is that my lovely wife when I die will sell the sleds for what I told her I paid for them. That would hurt."

All joking aside, Long is on a mission and he is encouraged by the younger generation getting more into the hobby.

For a list of shows and events, you can contact any of the ACSCC board members or visit them online at www.acscc.com.