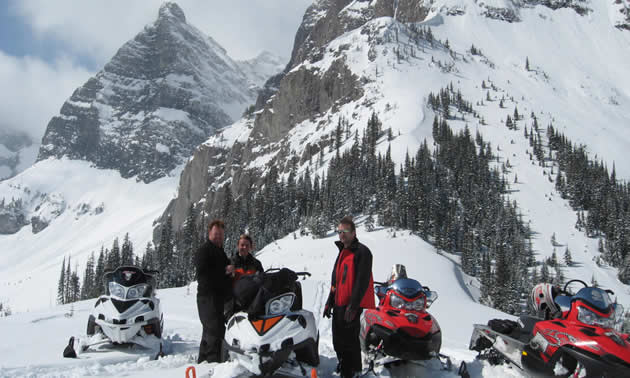 The terrain throughout southern Alberta’s Crowsnest Pass is a vast playground for snowmobiling enthusiasts. The approximately 1,200 kilometres of established trails—about 200 of them groomed—allow groups with mixed skill levels to start and finish their rides together in areas that accommodate both beginner and expert sledders.

"If you have riders of different levels in your group, we have the groomed trails that take you out to the bowls," said Doug Cox, president of the Crow Snow Riders. "The beginners can play around in the bottom of the bowl, where the sledding is not so technical, and the advanced sledders can go out on the sides of the mountains—so everybody can get the most enjoyment out of their sledding.”

The Lost Lake ride—considered intermediate in its challenge—is a 60- to 70-kilometre ride. There are groomed trails all the way from the staging areas at York Creek and Sartoris to the bowl, then you go up through some ravines and drop down to a lake that’s right up against the Continental Divide. There is another way out if you don’t want to climb the hill that you dropped down.

Just out of the mountains and into the foothills about two to three kilometres from the lake is a warm-up cabin available for snowmobilers.

The favourite spot for breakfast in Crowsnest Pass is Chris’s Restaurant; over a hearty breakfast to get you fuelled up, you and your group can make plans for the day. When you come in from the trails The RumRunner Restaurant and Lounge is the place to go for good food and good atmosphere, and when you run out of your own stories you can watch professionally made sledding movies.

This corner of Alberta has an extensive network of sledding trails, attracting riders from far and near. To the south, the most popular rides are Lost Lake, York Creek and, farther south, the McDonald range. To the north, some of the fun rides are Atlas, Window Mountain, Tornado Mountain and Spoon Valley.

About three kilometres north of Coleman on the Kananaskis road, there’s a whole new area—formerly a gas field—that will be opened up to sledders in the near future. It will have its own staging area and is expected to be rated as intermediate level. This area, having more open terrain, will sidestep the avalanche risk.

A word of caution

“Play in pairs or groups,” Cox said. “Intermediate areas can quickly and suddenly become very challenging with a heavy fall of snow. The distance you can go in 20 minutes on a snowmobile may take you a day to walk out of if you break down—and that’s assuming you have daylight. We’re not advocating that you should go climb mountains, because then you get into the avalanche risk. The groomed trails are quite well marked, and once you get beyond that you’re up against the (Continental) Divide.”