Trip Planner: What you need to know before snowmobiling in Crowsnest Pass, Alberta.

Trail map, top snowmobile trails, club contacts and other information you can use when planning a snowmobile trip to Crowsnest Pass, AB 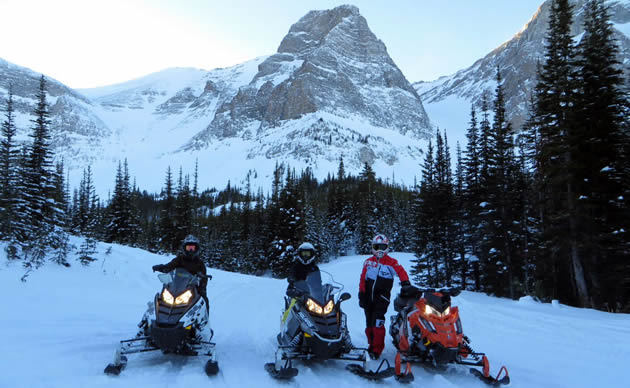 Where the foothills of Southern Alberta become towering peaks of the Canadian Rockies lies Crowsnest Pass—a low-elevation mountain pass and, more importantly, a snowmobiling destination that offers a wide array of riding opportunities. With everything from family-friendly snowmobile trails to high-alpine sledding terrain, Crowsnest Pass offers riders of all skill levels exactly what they've been looking for. The five main communities that make up the Pass (Bellevue, Blairmore, Coleman, Frank and Hillcrest) are sled-friendly with restaurants, fuel stations and accommodations that will make you feel at home during your entire stay.

Hopefully, this page will help you plan your next snowmobiling trip to Crowsnest Pass.

Hard copies of the Crow Snow Riders’ trail map are available at any of the fuel stations in Crowsnest Pass. Detailed maps and directions to the main staging areas can also be found on the Crowsnest Pass Quad Squad’s website.

There are 200 kilometres of groomed snowmobile trails and a total of 1,200 kilometres of maintained trails in and around Crowsnest Pass. Multiple trips here will get you feeling more comfortable with navigating the terrain, but where to begin if this is your first visit? The best, or most popular, places to go snowmobiling in Crowsnest Pass include:

Named for its unique limestone arch, Window Mountain is a popular snowmobiling area that offers impressive scenery and riding for a variety of skill levels. It is accessible via the Atlas Staging Area northwest of Coleman.

Lost Lake is considered one of the best places to go snowmobiling in the Crowsnest Pass. To get there, riders will usually park at the York Creek Staging Area south of Coleman and ride groomed trails to the local snowmobile club’s south shelter. Near the shelter is where the Lost Lake Trail starts. Rated for intermediate riders, the trail goes over the mountain into Lost Lake where there is ample opportunity to do some tree riding, hillclimbing and pow turns. Before going over into the Lost Lake area, riders should check avalanche conditions on Avalanche Canada.

Circle tours are not uncommon in the Crowsnest Pass, given its extensive and interconnecting trail system. One example of this is the Spoon Valley-Window Mountain loop, which can begin from the McGillvray Staging Area.

Where to buy a snowmobile trail pass in Crowsnest Pass, AB

Trail passes are not mandatory, but members of the Crow Snow Riders are extremely appreciative of riders who purchase a daily trail pass or an annual Alberta Snowmobile Association membership before they head out. These are available at Esso, Husky, BCMInn Coleman, The Kanata Inn and Top Gunn Automotive & Powersports. You can also show your support of the Crow Snow Riders by purchasing a club membership.

It’s important to check the current avalanche bulletin from Avalanche Canada before you head out. Crowsnest Pass snowmobiling areas are mostly in the South Rockies region forecast. To get the bulletins on your smartphone, you can download Avalanche Canada’s app from the Google Play Store and the iTunes App Store.