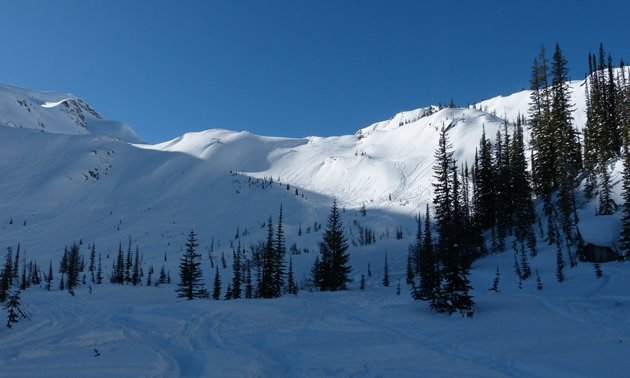 At the end of the Forster Creek meadows, sledders will come to a large headwall; above it is Thunderwater Lake. Kirsten Armleder photo

I hate to admit it but I’m like any “typical” woman. I take forever to get ready, fussing over my hair and my clothes, ultimately driving my husband, Monte—and myself—bonkers. But if there’s one thing I can get ready for in a hurry, it’s sledding. So when I said, “Let’s go,” at 7:15 a.m., which was 45 minutes before our official ETD, my husband was a little stunned.

It was the morning of February 10, 2013, and we were headed to Golden, B.C., for an epic sledding adventure that we had been planning for weeks. On our way there, however, we decided to break up the trip and check out the Forster Creek area near Radium Hot Springs.

I’ve always thought of Radium Hot Springs as, well, a hot springs town, not a sledding destination, so I could barely believe my eyes when we pulled into the parking lot at Forster Creek and saw about 25 trucks and sled trailers—and they were still pulling in. The Backroads Mapbook said it was a popular area, but we were still taken by surprise. I’m guessing the majority of people who ride this area are from out of town as most the the trucks had Alberta and Saskatchewan plates on them. There was even one rig from Manitoba—boy, that’s a long way to drive. At that point, our ride became a mission to see what the hype was all about.

The Windermere Valley Snowmobile Society maintains the trail in and out of Forster Creek and there is a fee of $10 per sled to ride it. The toll booth is located right at the parking lot, so it’s easy to deposit your cash as you head up the trail.

It was a straightforward ride in—something any beginner could do—and the trail didn’t start climbing until about three quarters of the way up. The trail was pretty rough from all the traffic, but we saw that the grooming machine was starting up—so it wouldn’t have been long before the trails were smooth again.

The trail brought us into a great big meadow that would’ve had some wicked riding in it were it not for a two-week lapse in snowfall. Any bit of untracked snow we could find in the meadows we shredded to pieces, which meant riding dangerously close to a deep creek. A few tracks made by unsuspecting riders who had gotten sucked into the creek reminded us to be careful. We also poked around and found that there was some good snow left in the trees.

At the end of a second alpine meadow, we came to a huge headwall. Monte went on ahead and climbed over the top of it, but I chickened out and decided to stay in the meadow and watch a guy who was bombing around on a snow bike.

When Monte returned, he told me Thunderwater Lake was just above us and that he had rode into a massive bowl and saw incredible views of the valley. It was tempting, but I just did not have what SnoRiders contributing writer Trish Drinkle refers to as my "Honey Badger Grrr" on that day. I kick myself for not grabbing a handful of throttle and attacking the headwall. It was the sitting there, over analyzing the situation that stole my confidence that day. The next time I ride Forster Creek, there will be less thinking and more doing—that I am sure of.

Back to the story of our ride: we spent another hour exploring other nooks and crannies of the meadows that hadn’t been shredded up before heading back to the truck. It was another bumpy ride down, but we were glad we had checked out this amazing area. It’s not often we get to ride into massive bowls and reach snow above 7,000 feet with ease.