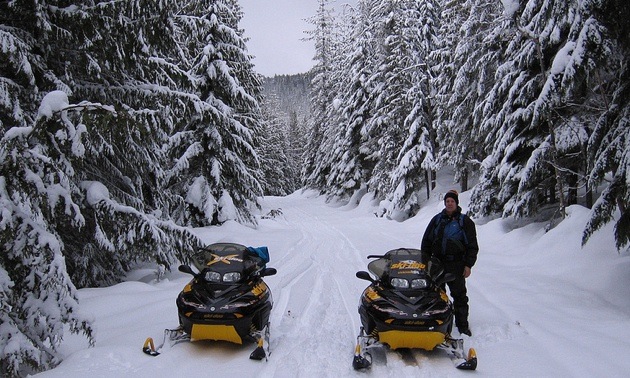 Okotoks is 20 minutes southwest of Calgary and riders there hit the same trails as the Calgary Snowmobile Club, enjoying scenic landscape and playful rides through the backcountry. Dale Case heads out about 12 times a year, making the absolute most of Okotoks’ slim riding season from January to the end of March.

Families and people looking for a day trip go to Etherington and Cataract Creek on Highway 40, just outside the Longview area. This 100 miles of trails used to be maintained by the government with help from the Calgary Snowmobile Club until about four years ago, when the park lost its funding for grooming.

“We lost the groomer, but people still go out quite often for a day,” said Case. “It’s about an hour from Okotoks to the staging area and they still plow the road and have elevated ramps for public use.”

Sledders can put on 80 to 100 miles in a day and, although the trail system is complex, most intersections are marked with good signage and trail maps are available online.

Kananaskis Country, a park system west of Calgary, is situated in the foothills and front ranges of the Rockies and is a favourite destination for sledders who want a longer ride and more challenging terrain.

“People can also go up into Fording, B.C., from here,” said Case. “There is more snow there, the trails and hill climbing are good and you can get a good run until the end of March or beginning of April, if you like riding in spring snow.”

Some of Case’s favourite riding is in the Fernie area for hillclimbing and mountain riding, and to the pipeline up through Coal Creek to play at the powerline and up to the Notch.

“I’ve gone a few times to Crowsnest Pass, which has nice groomed trails into the Lost Creek area,” said Case. “Fernie has been our go-to area, up the pipeline. You can ride about two hours from Okotoks to Crowsnest and turn off and go up the Mine Road almost at Sparwood, then go on the pipeline to Fernie or to Corbin, which will take you right to the U.S. border.”

The trip to Corbin is a 100-mile round trip, and you have to know where you’re going, said Case.

Otherwise, the Okotoks terrain is great trail riding, with open meadows for playing around and for families or junior riders just looking to get a feel for their machines.

One of Case’s most memorable rides was to Priest Lake, Idaho, with his father-in-law. Case had been there in the summer of 1991 and always dreamed of coming back in the winter to check out trails through the mountains that come down from Cranbrook, B.C.

Priest Lake boasts 400 miles of groomed trails that circumvent the lake, warm-up cabins and a good resort for overnights.

Case laughs talking about his best stuck back in Okotoks, which wasn’t at all what you would expect.

“I had a group out playing around on the trails and we saw an old logging road off to the side,” said Case. “It was all virgin snow. About a quarter mile down there was a dip in the road and I went around it and a little further down the trail got narrow and built up with brush so I went to turn around.

“I was turned around looking at the group and I punched it to get through the dip and my sled went down four feet. After digging down to get the sled out I was standing beside it and couldn’t see over the trail.

“I was stuck for three quarters of an hour digging it out, because the snow got up and was hanging off the running boards. Oh, we were jammed in. And on a flat road!” he said. “For some reason I dropped like a rock and hit the solid.”

Hometown: Born in Calgary, grew up in Crowsnest Pass

What do you like about it? It has a longer seat, so I bought a seat jack so I can have my daughter with me. And you sit in the sled, rather than on it. The new sleds are meant to stand up. I will get a new one some day, but this one works so good and is comfortable.

Favourite type of riding: We like playing in the trees a bit, darting in and out. You can drive up the trail, find another spot to play in trees, get back on the trail... and playing in meadows, going back and forth to play a bit between the trees and the open areas.

Epic whoopsie: We were in Fernie and we got into some fog. We were heading up towards the cabin on a new trail that cuts across on the way home from the pipeline. I thought I was going across the ridge, but I was going up, climbing the ridge over to the right about 20 degrees. All of a sudden a ditch comes down the mountain and into a ravine, so I punched it and went right across, hit the other side and dug it in to stop it. Fortunately, we had two-way radios so I could tell the other guy to stop and not come flying right into me.

Where do you want to ride in the future? West of Yellowstone. I have researched it and there are miles of groomed trails that travel through three states. I am kicking myself for not having gone when you were able to go right in the park without a guide.

What does sledding mean to you? It’s a good family sport. Growing up in Crowsnest Pass we would sled in the winter and ride motorcycles in the summer. Back then you could ride around town on them. I’ve always been an outdoors person, and this is a way to get out in the backcountry and see lots of new things. 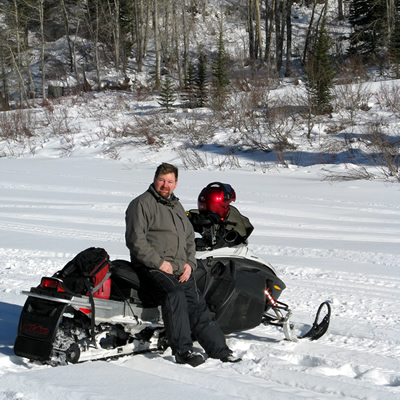 SledLife, Calgary, AB Award and rewards in the quest for Cataract Creek

Passion for sledding drives Scott Kjarsgaard of Calgary, Alberta, toward his ultimate goal of turning Cataract Creek into a world-class trail system.