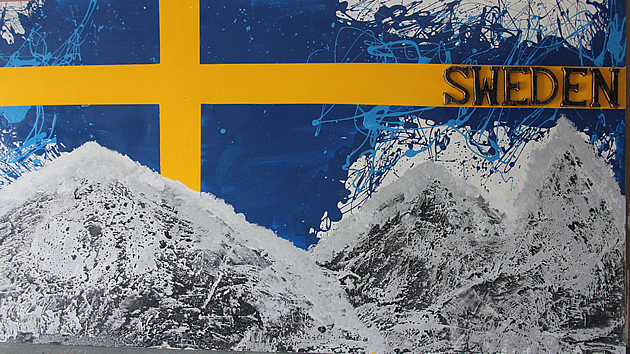 Each of the paintings depicts a mountain scene from the country it represents. photo courtesy Cindy Brooks

Riders participating in the rally on Days Four and Five of the 2015 World Snowmobile Invasion in Whitecourt, Alberta, will get to see the work of a local artist named Justine Vandenhouten.

Vandenhouten has created a series of paintings depicting the countries that are being showcased at the event—Japan, Finland, Norway, Sweden, USA and Canada—and they will be used to decorate each themed checkpoint along the rally. The goal, according to WSI organizers, is to make each checkpoint feel like riding into a different country.

Vandenhouten donated her time to this project, which took a month to complete.

And Cindy Brooks, who is the WSI event planner, is pleased with how well the paintings turned out.

“What makes them spectacular is that they are one of a kind,” said Brooks, “not just a flag or copies of a print. They are her design.”

Vanhouten did a lot of research on each country and she even used traditional Japanese painting methods in her depiction of Japan.

She hopes that after the WSI is over, the murals can go on display somewhere else. Brooks agrees.

“In the future,” said Brooks, “it would be nice to see these murals posted in a business or place that will showcase our event.”

The paintings are just one more reason to get your tickets early for the WSI. To learn more about Vandenhouten and her work, go to her website, Evermore Artistry.