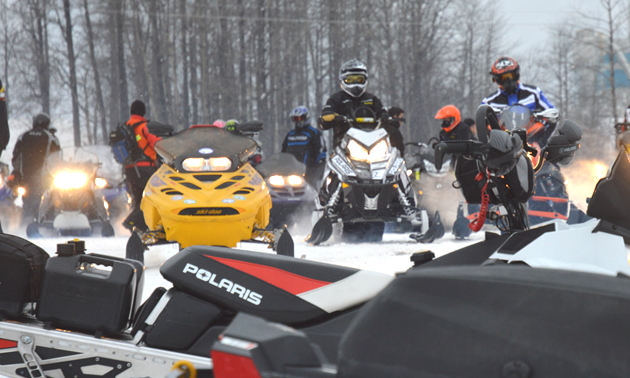 Over 100 sledders left the Welcome Centre this morning on the Golden Triangle Tour. Kirsten Armleder photo

We’re here in Whitecourt, Alberta, reporting live from the 2015 World Snowmobile Invasion. Day 1 of this five-day event is just coming to a close.

It started at 7:30 a.m. down at the Welcome Centre (Senior’s Circle) with the Golden Triangle Tour. Two-stroke smoke filled the air as more than 100 sledders hit the trail. Their destination for tonight was Fox Creek, the halfway point on this tour. Tomorrow, they will finish where the ride left off and hopefully be returning to Whitecourt around 3:30 p.m., completing a 378-kilometre ride.

As the day progressed, we stopped in at the Westward Community Centre, which is about eight kilometres south of Whitecourt, to see the preparations that are being made for the BRP/Polaris Freestyle Event on Friday night and Sunday night. Timbersled’s Reagan Sieg had just shown up and so he gave us the lowdown on his plans for his freestyle snowbike demonstration. It’s going to be one incredible show, so if you don’t already have tickets make sure you stop by the Welcome Centre and buy some. According to the organizers, this event is going to be better than X Games!

Tomorrow’s big event is the ASA World Snowmobile Parade. After a snowmobile club in Ontario set a new world record last weekend, the Whitecourt Trailblazers will now need at least 848 snowmobiles in the parade to break it. Let’s not disappoint them. So tell all your buddies to bring their sleds, new or old, to downtown Whitecourt tomorrow evening. Registration starts at 5 p.m. and the parade will begin at 7 p.m. It’s free to participate. All the Trailblazers ask is that you have your parade forms filled out beforehand.