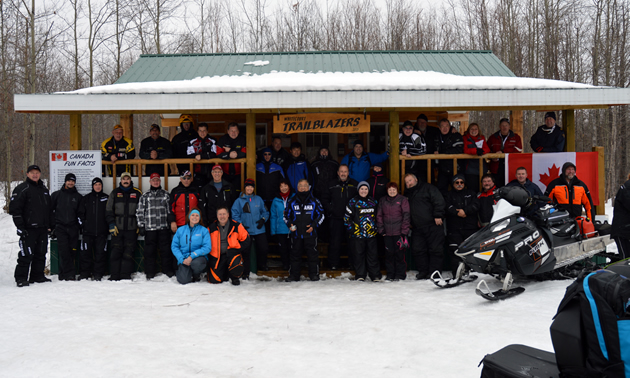 It’s Day 3 of the 2015 World Snowmobile Invasion in Whitecourt, Alberta. On the agenda today was the Silver Summit Guided Tour. Riders departed the Welcome Centre shortly after 9 a.m. to go on a 178-kilometre ride to the Silver Summit Ski Hill near Edson.

We chose to join a group of about 35 riders on a Delegate Ride, led by longtime Whitecourt Trailblazers member Willard Strebchuk. Also in attendance on this ride were prominent members of the Canadian Council of Snowmobile Organizations, the Alberta Snowmobile Association and the British Columbia Snowmobile Federation. George VanderBurg, who is the Alberta MLA for Whitecourt-Ste. Anne, and Maryann Chichak, who is the mayor of Whitecourt, were also in attendance, as were a couple of RCMP officers from Whitecourt.

But the VIP guests on this ride most certainly were the couple from Yūbetsu, Japan. They made the trek overseas to ride Whitecourt and experience the World Snowmobile Invasion. Through their interpreter, I was able to gain some insight into the differences between snowmobiling in Canada and Japan. They told me that in Japan there are fewer trails and that snowmobiling is more restricted. Most of the snowmobiling in Japan takes place in the province of Hokkaido, and the town where they are from is a popular snowmobiling destination—which seems fitting since it is the official sister city to Whitecourt.

The Delegate Ride lasted until 3 p.m. Afterwards, everyone gathered back at the Welcome Centre to enjoy the hot food and drinks that were available for purchase. It was a good day and one that isn’t over yet.

My next update won’t come until tomorrow. That’s when I’ll give you all the lowdown on the freestyle show. But you can still follow us on Twitter and Facebook throughout the evening.