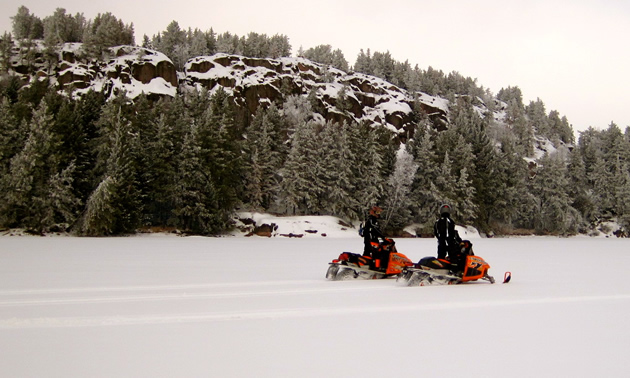 The town of West Hawk Lake can be used as either a starting point to your sledding adventure in Whiteshell Provincial Park or a stop along the way. Formed by a meteor that collided with Earth millions of years ago, West Hawk is Manitoba’s deepest lake. At 110 metres deep, it is a popular place for scuba divers as well as anglers and boaters, but in the wintertime, when the lake freezes over, the signs go up and a groomed snowmobile trail appears.

Running the entire length of the lake, this trail leads north to Caddy Lake and joins up with the Zubek Trail. The Zubek Trail follows a decommissioned logging road with some switchbacks along the way. It is rated for families but all sledders should follow the signs and be cautious while riding around the switchbacks. There are some hills and undulating terrain changes along the way as well. Since the Zubek Trail is relatively new, it sees less traffic than some of the other trails in the park but it is still groomed on a weekly basis.

From the Zubek Shelter, sledders can loop back to the town of West Hawk Lake or extend their ride by heading south to Falcon Lake. All of the main trails in Whiteshell Provincial Park are interconnected and it is Manitoba Conservation that grooms them. Grooming is usually in full swing by the second week in January, although the best time to ride is February to mid-March.

Most of the towns in Whiteshell Provincial Park have amenities, such as hotels, restaurants and gas stations, that remain open all year long. Keep in mind that some restaurants—Pittman’s on 44 at West Hawk Lake for example—may limit their hours of operation in the wintertime. West Hawk Lake is also one of the last lakes in the park to freeze so sledding across the lake is not recommended until Manitoba Conservation is grooming the trail.

For more information on sledding around West Hawk, Falcon Lake and elsewhere in the park, contact the Whiteshell Snowmobile Club.

“Our best riding is from the first of February to the middle of March,” said Randy Williams, president of the Whiteshell Snowmobile Club. “Our trails are well groomed by then and our temperatures are a little more bearable. January in Manitoba, we can get some 40-below wind chill days and that’s not fun being on a lake. It doesn’t stop us, though.”

This year, the Whiteshell Snowmobile Club’s annual poker derby takes place on March 1. Everyone is welcome to join this fun event but the club asks that you purchase a membership for $10.

Falcon Lake becomes a hot spot for visitors and locals alike as everyone flocks to the annual Beaver Days Winter Festival. Activities that usually take place during this family-friendly event include a snowmobile poker derby, demo riders and time trials on the lake.
Info: Whiteshell Community Club