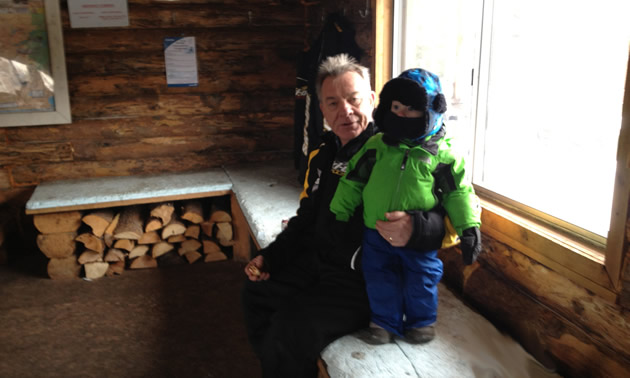 Kris Mutcher's father Frank and his son Mason. Three generations out for a ride with a stop at Red Rock Shelter. Photo courtesy Kris Mutcher.

For Kris Mutcher, riding in Whiteshell Provincial Park in Manitoba is by far the best sledding experience he could ask for. As president of the Whiteshell Snowmobile Club, Mutcher has spent years riding the trails. Now with a young family, he appreciates the friendly atmosphere of the Whiteshell's trail system. With nine warming shelters throughout the park, family fun is guaranteed with numerous opportunities for a wiener roast stop and family bonding.

One of the best rides Mutcher has done was his last ride of the 2012-13 season.

"It was March 24 of this year when me and my dad went for a ride, just the two of us," said Mutcher. "It was incredible. We got this last ride in because it was extremely late in the season. Normally, the first weekend in March is guaranteed, the second weekend is hit or miss and by the third weekend in March it's done."

Mutcher and his dad Frank left from Red Rock Lake, where they have a cottage, and rode south to Falcon Lake and then back up to the north around the Beauchemin Lake Loop, and then back home. They covered about 150 kilometres within the park and had the best conditions of the year.

"Everything lined up appropriately where we had really good grooming and a long, consistent season of grooming, so the trails were well packed and set up really well," said Mutcher. "And then on top of that we had a bunch of fresh snow on top of it. Because it was so late in the season, a lot of people had made other plans or just hadn't been out so we had a really nice solid base underneath a bunch of fresh snow and hardly anyone out on the trails to tear it up. We had basically three-quarters of the day on our own on the trails."

As Mutcher said, it's not very often you get to do your best ride of the season as your very last one.

"In the 2012 season, all our trails were gone by the first weekend in March so we had a very short season," he said. "So it was really nice to have a long extended season in 2013 and have such great sledding until the end of March."

Besides the snow, sledding in the Whiteshell is great for seeing wildlife. On this ride, Mutcher and his dad got to see two massive eagles circling around a lake and on other occasions have seen lots of deer, the odd lynx and wolves as well.

For Mutcher, riding with his dad is a great way for them to spend time together, especially since his dad is the one who introduced him to sledding.

"I ride a lot with my dad," said Mutcher. "It's great because we both have a passion for sledding and he is the one that introduced me to it. It's a great way for him and I to get out and spend quality time together. You have great chats in the warming shelters and the rides always give you good stories to talk about once you get home."

"It's special being able to ride with my dad and now my young son," he said. "It was amazing to be able to go out with three generations. It was pretty neat."

Favourite trail/riding area: Whiteshell Provincial Park. "It's got fantastic grooming and it's very family friendly, since you have nine warming shelters within the area. There is always a unique place to stop and the terrain is really unique for Manitoba in that you're in the Canadian Shield. You go over rock ridges, then you're on a lake and then you're back in the bush, through swamp, then another ridge and so on. It's great having this varied terrain."