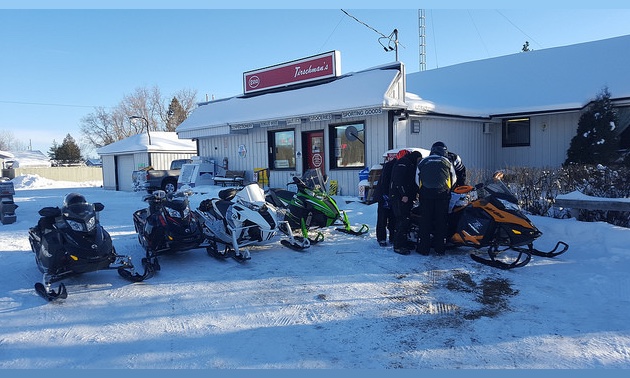 An early morning fuel up for the ride ahead. Photo courtesy Bob Brandt

For outdoor enthusiasts Whiteshell Provincial Park is a haven. In the summer, walking trails lead sightseers through jack pine forests to clear-water lakes perfect for fishing, swimming or just for taking in the view. In the winter, snow piles on the trails and lakes freeze over turning the park into a snowmobiler's white dream.

Located an hour-and-a-half east of Winnipeg on the Ontario border, the park boasts over 250 kilometres of groomed snowmobile runs that are maintained by the Province of Manitoba and link users to other, more adventurous playgrounds beneath rocky peaks and spruce trees.

To Bob Brandt, owner of Crikside Cats in nearby Steinbach, Manitoba, this wonderland is just another word for his backyard. At 68, Brandt has spent most of his life living, working and playing in the area and has always been drawn to nature.

Aside from selling and servicing snowmobiles — among other equipment like chainsaws and snowblowers — he is an enthusiastic rider and has been since the late 1960s. For years he and other members of the Crikside staff have led a free, weekly ride every Thursday — weather permitting — along the trails in and around Whiteshell as an open-ended offer to customers and community members.

For Brandt it's a community thing and one that sees people of all ages and walks of life come together to enjoy the outdoors and to feel the rush of horsepower beneath them. The rides are as diverse as the people who join in, with some days becoming long adventures that take them into the night.

When asked why he has dedicated a large portion of his life to snowmobiling, the answer is straightforward and simple.