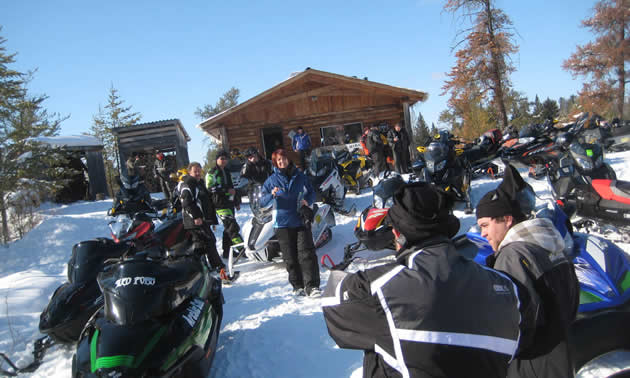 Poker derby participants met up at the Red Rock Shelter during the 2012 ride organized by the Whiteshell Snowmobile Club. Maureen Hepples photo

The Whiteshell Snowmobile Club in Manitoba prides itself on the fellowship of its members. The club holds numerous rides and events all season long—not only to raise funds but to bring sledders together. The 450-member club enjoys its trail system, which is located in one of the most beautiful parts of the province. Riding through Whiteshell Provincial Park means riding in the Canadian Shield, through majestic forests and by serene lakes.

Add in a bunch of fun-loving sledders

One event that surely brings together a huge number of people and provides great support for the club is the annual poker derby—this year happening on March 2. This will be the third year for the event, and according to the club's president, Kris Mutcher, it's the last chance of the season to rip it up with fellow riders in a big way.

"The day starts at Brereton Lake Resort where people register," he said. "We then do a loop through the Beauchemin Lake Trail with stops at a few warming shelters, then another stop at White Lake Resort. The last stop is Red Rock Shelter, where we do pulled pork sandwiches and a big barbecue."

Last year, 175 sledders showed up—which translated to 250 poker hands—and this year, Mutcher is hoping even more people will come out.

"It's a great family event," said Mutcher. "Lots of people bring their kids. There's a shorter loop to make the ride accessible for more novice riders, then a longer loop for those who want to stretch it out and put more miles on. This event is really just a great excuse to go for a ride together."

Those who wish to take part in the poker derby register at Brereton Lake for a fee of $20 per hand. The prizes last year should encourage this year's participants to get as many hands as possible; there was a full snowmobile suit, helmets, boots and other riding gear, gift certificates for local restaurants and resorts, and a grand prize of $750 cash.

All the money raised at the event goes right back into the club to maintain shelters and the trail system. This ride is also special in that it's the last event of the year; in this region, the snowmobiling season is usually over by the second or third weekend in March.

"It is the final big event of the year," said Mutcher. "We picked this weekend because the last two years, we had fantastic weather, trails are usually at their peak at that point and you have as much snow as you're going to get. Soon after, the snow will start to melt—and sadly, the season will end."

At a glance >> Whiteshell Snowmobile Club