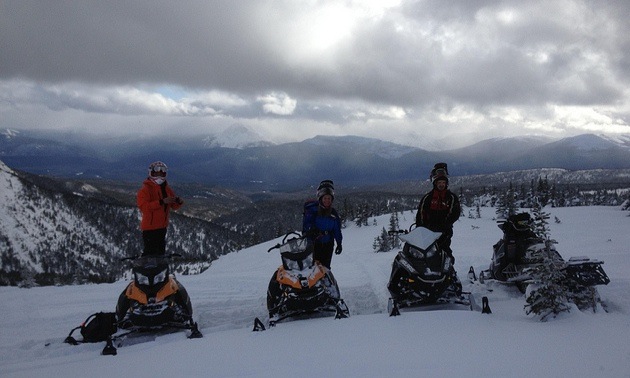 Ridge Riders Snowmobile Association president Adam Court said the newly revived club is brimming with enthusiastic riders working behind the scenes at having three of Tumbler Ridge’s main riding areas registered with the provincial government and they’re ready to break trail at the first sign of snow.

Babcock, Wolverine and Bullmoose are where sledders will find most of the action, although endless miles into the backcountry can take a lifetime to explore.

“We’re usually the first ones out there,” he said. “At the first sign of snow we’re ready to go.”

Court’s first ride of the year will probably be to Wolverine to break trail, which can be as much work as it is play.

The oil and gas boom in northern B.C. has brought with it a new wave of sledders and attention from the Canadian Avalanche Center (CAC), which included Tumbler Ridge in its Northern Rockies pilot project, aimed at establishing permanent monitoring stations in the region.

In fact, last year’s ride with CAC and local sledder Jeff Cool was one of Court’s favourites—the calm, comfortable ride to the Babcock area was smooth and the weather was fantastic.

“The attitude was great and Jeff knew where to go, and it was an amazing, calm ride, but exciting too,” he said. “It just flowed. The clouds were just rolling in—it was beautiful.”

Huge volume of areas to ride

Tumbler Ridge reminds Court, who’s been hitting the hills for a decade, of Revelstoke, but without the crowd.

“A lot of it is untouched and the volume of the areas is huge—there’s so much, you could ride for years and not touch the same spot,” he said.

Tumbler Ridge’s location on the divide between the mountains and foothills means intermediate to expert riders can explore the rugged backcountry and beginners can cruise the 20 to 40 kilometres of groomed trails the club maintains.

Last year on the first good ride of the season, Court and a friend were breaking trail into an area on Wolverine and the creek was still flowing underneath the trail.

“It was really too early to get in to it,” he said. “Two guys behind us decided to go into the creek instead of sidehilling. The first guy nosedived into the creek, and when I first saw it I was thinking, ‘How are we going to get this guy out?’

“Then his son came in behind him and got stuck the exact same way. I guess he thought he’d be able to beat his dad, but he ended up right in the creek with him. It took a couple of hours to get them out. It was a good one.”

Waiting for the snow

Some time between the end of October and the end of November, the snow will fly and so will club members, who totalled around 40 last year.

“We’ve been looking out the window for three months now. Since it melted, we’ve been waiting.”

What do you like about your sled? It goes everywhere. It sidehills really nice and it has a smaller track, but it seems to turn better. And I love the weight.

Would you change anything about it? I wish there weren’t as many recalls. I haven’t had any problems, but I get a bit miffed because it takes time to take it in.

Where do you usually ride? In the past year, mostly Tumbler Ridge, but before that Fernie, Revelstoke and southern Alberta in the Crowsnest Pass area.

What was your most memorable ride? We were in Revelstoke at Frisbee Ridge and we went up on June 15. We drove the truck all the way to the load out area and had to drive up the mountain quite a ways. It was 22 degrees, and we were in t-shirts riding all day. Everything was beautiful. On the way back we had to go through three kilometres of mud because it had melted that quickly.

What was your most epic sled whoopsie? Last season, I’d just bought my sled and I wasn’t quite used to it. It was our second ride of the year. We went back into Wolverine in Tumbler Ridge and a bunch of us were high marking. There were chutes on either side of a cliff and I tried to cut across the cliff and hit the other chute. I went off the cliff and sailed 60 feet before I hit the other chute. I almost bailed, but I thought, “Do I want to save 16 grand or do I want to survive?” I just closed my eyes and picked the 16 grand. It looked like I meant to do it. I landed it and I lived, so that was great.

Where do you want to ride in the future? Pine Pass. It’s not far from here. It’s just amazing the amount of snow—in some spots there’s 12 metres a year. It’s very much untouched.

What does sledding mean to you? Freedom. 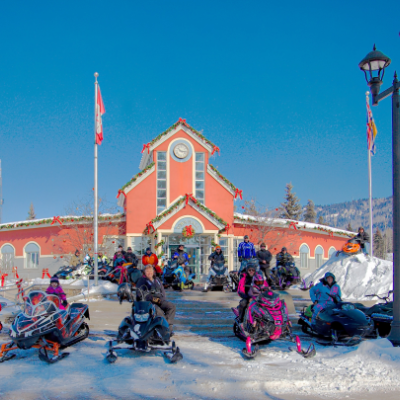