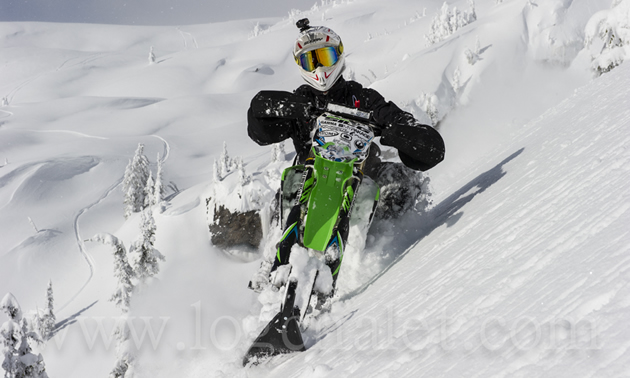 After his first kit in 2012, Reagan Sieg knew he wanted to be a bigger part of developing the sport of mountain snow biking. Rob Alford photo

The name is Reagan Sieg. Most will recognize this Vernon, B.C., shredder as one of the featured riders in the sled film Braaap. This past season, he hit the snow scene like a frozen tsunami with his snow bikes. He had dabbled in snow bikes a bit, but in the winter of 2012 his good friend—and professional moto racer—Brock Hoyer gave him a taste of what the Timbersled Mountain Horse Kit could do. It was true, the Timbersled was that good. So good, in fact, Hoyer gave up traditional sledding altogether.

Although Sieg had been on sleds and dirt bikes his entire life, bikes were his true, deep-seated passion. After his first kit in 2012, he knew he wanted to be a bigger part of developing the sport of mountain snow biking. Teaming up with his friend Chad Edwards from Innerspace Watersports, the duo launched Okanagan Snowbikes, selling products from Sieg's website.

Sieg knows different. Through the tightest of trees and the deepest of pow, these bikes rock it. They go where you steer them with very little feedback or pull from uneven terrain. They have very little drag, which means they do not get stuck easily. Part of this is because of the lack of running boards—like on traditional snowmobiles—which drag in the snow and can suck the sled down, resulting in a stuck. Snow bikes slice through the snow and sidehill with ease.

Sieg explained that snow bikes shine in all snow conditions and they give you the confidence to take almost any line you want to get to your destination. Tight trees are much easier, as there is only one ski to weave through the tight terrain rather than the two.

After a day of riding, my sled friends and I discussed the concept of snow bikes. Because of the ability to ride such incredibly steep and tight terrain, our ride possibilities would grow exponentially if we were on snow bikes. Instead of a long ride to a fun play spot, we would have epic riding right from the doorstep, in terrain not easily accessed by a conventional sled.

We discussed which platform would be best for our tight, steep and deep B.C. wonderland. Sieg explained that Timbersled makes three different models: ST short-track 120, LT (which is a long-track 137) and an SX 121.

The ST is the standard choice for the average-sized person looking to ride all snow conditions. The LT is meant for a heavier person with a big bore-type of bike, and the SX is meant to handle hardpack and jumping; this choice would be perfect for an aggressive rider or someone who is riding snow that is set up and firm.

Which one is right for you?

When choosing a bike, Sieg would first ask, “How heavy are you?” A person under 220 pounds can get by with the short-track 121 but anyone heavier should consider the long-track 137 and perhaps go for the gusto with a big-bore 450-cc bike.

The beauty of snow bikes is the epic control. Sure, a sled can go straight up a hill faster but with the right line choices, a bike can get up almost anything. The rider can zigzag up a steep mountain, lay his bike over in the snow and eat his lunch before the conventional sledders reach him. And they will have little chance of stopping for a chat before they go back down.

Stucks are a breeze. A simple ski pull from a friend pops the snow bike out of most any situation.

I asked Sieg about his most epic moment and he had a hard time pinning it down. This past season, he worked hard to raise the bar. With his own personal best, Sieg is certainly impacting the industry and the way snow bikes are viewed. Huge drops and decent lines can be seen in this season’s Braaap 13.

He knows for certain that the 2013-2014 season is going to blow the socks off many enthusiasts. Timbersled is going big. They are always working on ways to perfect their product and they will be pushing, testing and gaining even more rider feedback. An articulating front suspension arm in the skid along with a new centre skag design will enhance hard-pack performance.

Hmm . . . how about boost? After trying Allen’s boosted Kawi 450, Sieg is certain that this is only the beginning. Expect awesome.

Contact your local dealer to find a demo ride near you. Book early as availability may become limited.