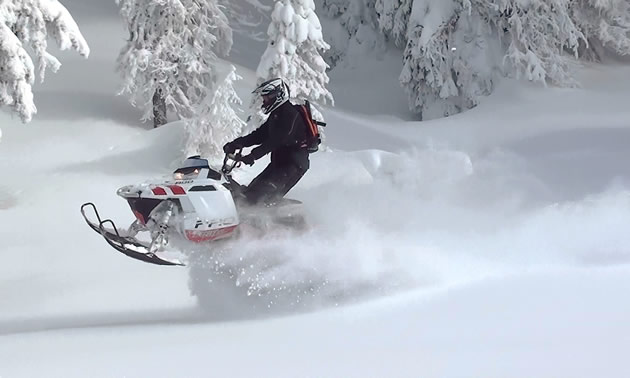 Jamey Yasek tears across some fresh snow while sledding with Trish and Kevan Drinkle in the West Kootenay region of B.C. Trish Drinkle photo

I saw the sun poking out from the clouds; I don’t care who you are, if you sled, poking-out-sun makes you go, “Tee hee hee.”

Jamie and Brandon showed up and were ready to rock and roll! I was still a little stiff from the ride the day before, but wahoo, we are going to bust a move.

On a good day, I’m less than graceful—add stiff muscles into the picture and you have something like a drunken one-legged baboon. That is just a little heads-up to set the tone for the rest of this story.

Anyways, we began our journey. I was feeling it—I mean, the zest for the pow and the cool winter wind on my face. We headed into the trees because there still was that unfortunate fog blanketing our wide open play area. Trees! I’m starting to get more confident, increasing my speed and finding fun jumps and sidehills amidst the labyrinth of branches.

Then came the first of a string of whoopsies . . .

I began a steep descent down through the trees when I thought, “Oh crap, I remember this place. I biffed it into a tree the day before. I must get to the right because if I go too far to the left, there is a steep ravine. Oh oh, OK, I can’t fit—should I zig to the left or go right?” Then I came to a complete stop.

Butt-kicking lesson No. 1: Do NOT doubt your skill and slow down to a stop when you are steeply encountering trees. Keep momentum up and commit. This is a time where you summon your inner grrr and trust the skill you have been developing.

My doubt and indecision sent me flying over my sled and landing on my head against a lovely tree in the wonderful, deep powder. Luckily, the snow off the tree landed directly on top of me—to serve as a reminder to pull up my big girl gaunchies and swing that freakin’ sled around. Decisions in the trees have to be made. There is no room for wishy washy and doubt. Pick the direction and make it happen.

Moving on. We kept on shredding and playing, playing, playing. I was having so much fun and singing the theme song from Peter and the Wolf. Strange obscure songs seem to come to me when I ride. It’s a crap shoot between ’90s gangsta’ rap or, like today, a song from my days spent playing classical music in an orchestra.

The sun was out and poking through the clouds so I let my guard down a bit, as we had light. Knowing full well there were bomb holes in the meadow we were playing in, I kind of got ahead of myself. I was scoping out the hill before me, but not paying attention to the terrain right in front. Oh, and did I mention that I was picking up speed?

Bam! Right into a freakin’ creek. The back of my track went in first and then it slammed down on the other side—I now have a lovely chest protector tat around my shoulders and in my abdomen. Thank God I wear a chest protector, as I am quite certain that I would have broken a few ribs otherwise. I’ll settle for bruises around my torso.

I laid in the snow for a while, admiring the clouds above. I was riding with probably the most kind and easygoing sledder on the planet. Jamie scooted over to where I was crumpled up and said, “Wow you sure hit that one hard!” Then he proceeded to ski-pull me out of the embankment.

Butt-kicking lesson No. 2:  Do not underestimate the terrain. Be cautious when you know there are certain terrain traps, such as bomb holes and creek beds. Flat light will get you every time. Expect the unexpected during flat light, for even if the sun pokes out, it is still less than optimum conditions. You will get caught like I did.

There was still a couple hours of fun time left. We kept on keeping on, tree playing and having a wonderful time. Lower elevations saw greater visibility and we made our way to another play area. Now, the day before I so pulled a wicked awesome move that I’m still incredibly proud of.

During practice time with Bret Rasmussen last year, he said to me, “Trish, there is a cliff.” We were pretending, but the intended purpose was to get my sled on edge and sidehill my sled across the visualized terrain, avoiding the drop-off and shredding to safety. My husband, Kevan, now uses that same “Bret” voice and says, “OK Trish, there is a cliff . . . ” When we were riding the day before, there actually was a cliff. Kev was down below, frantically waving me over. I laid my sled on edge and kabam, I was down the hill. Our friend, Rob, was impressed.

Today was a different story. At the same place, I went to bulldog it over but apparently, I should have just gone with the flow. I attempted to lay my sled over when I was at way too steep of a decline where there was an old track. So I tumbled over and ran myself over a few times. At that point, I was free and clear and should have just come down. Apparently, bulldogging it down isn’t appropriate in all steep situations—now I know. Owwww, I sure know.

Butt-kicking lesson No. 3: Know when to lay your sled over and when it is absolutely the worst possible choice in the world—you will save yourself a lot of grief and track marks on your body.

As we ventured on, I could feel my glove getting a bit tighter and my hand throbbed a steady beat while I rode. The loss of strength was apparent when I went to lay my sled over while following my husband in the trees. I didn’t make it. Happy, peaceful Jamie was there when I was trying to unstick myself. I pulled my glove off and, wowzers, there was quite a bit of swelling and blue bruising at my knuckles. My wonderful trusty snow stud (a.k.a. my husband) came to the rescue at that point. He skilfully manoeuvred my sled out of its predicament and we discussed our strategy. He looked at my hand and said, “Oh honey, we should call it a day.” I shook my head and told him to keep on going.

“I’ll just head down here in this cutblock and play sweetheart,” I said. “You guys keep exploring.”

Then he said the magic word: “bowl.” We’re almost at the bowl. There was no way in heck I was being left behind in a cutblock when there was a bowl up ahead.

I am proud to say that I made it and it was so beyond worth it! EPIC AWESOME fun! Big climbs, deep snow, fun jumping and sidehilling in deep untouched pow.

The journey out of the bowl and down the mountain was a bit of an adventure for me. I simply had nothing left. Totally spent, I decided this whole following a track thing was overrated. I wasn’t making the sidehills the trail put in by my husband demanded so I just went down and made my own path, and then down some more through the trees. I Hail Mary-ed at some points, but I made it!

And that, my friends, is the day I got my butt kicked, and kept on ticking!